You may recall in the not too distant past having your arm twisted to buy some fudge, relaxing on the couch for a session of Reiki, or maybe just being kind enough to make a donation to the very worthy cause that is Braemar Mountain Rescue in exchange for me running the Illuminator, the 15 mile trail race in Aboyne. The event itself was great, but what was even more exciting was that off the back of our fundraising Bruce and I were both invited to spend the day with the Braemar Mountain Rescue Team.

Trying to coordinate dates initially proved a minor challenge as everyone has such busy lives. However, as good fortune would have it today was the day, the weather was very much in our favour and we had a beautiful calm day, thankfully missing the challenging winds that would have made for bitter conditions yesterday! Thus, an early alarm (5:45 am!) woke me from a rather comfortable slumber and after porridge and a quick run through the shower I was good to go, or at least make lunch. Tomato soup (I’ve shared my love for this previously) and a tuna mayonnaise and egg bap – perfect!

The upside of an early morning was the ease with which we travelled out to Braemar. Arriving just in time for our 8:30 am rendezvous, we met with Nick and Derek, our Mountain Rescue hosts, and fellow fundraiser Callum and his dad, Gordon, Callum being the third person who’d raised over £1000.

Perfect hosts they were too! A team training day had seen the arrival and departure of the rest of the gang, and we were left to enjoy the tasty treats they’d not already scoffed, along with our coffee.

Nick led us through an interesting presentation on the Braemar Mountain Rescue Team and whilst I’d previously read and enjoyed the book, ‘Mostly Happy Returns’, that celebrated their fiftieth anniversary in 2015, the big screen really highlighted the ongoing dedication of the team, the extremes in which they operate, and the harrowing conditions that they face. The fact that everyone on the team chooses to do this on a voluntary basis is something that we should applaud them for. Albeit the role can be fun and exciting at times, it’s not much fun getting called out of your bed in the wee small hours or being out most of the night and getting only a few hours sleep before starting your ‘normal‘ day. (For clarification, that’s my take on it … both members of the team were clearly passionate about their role and its very much part of their lives however challenging it may be). 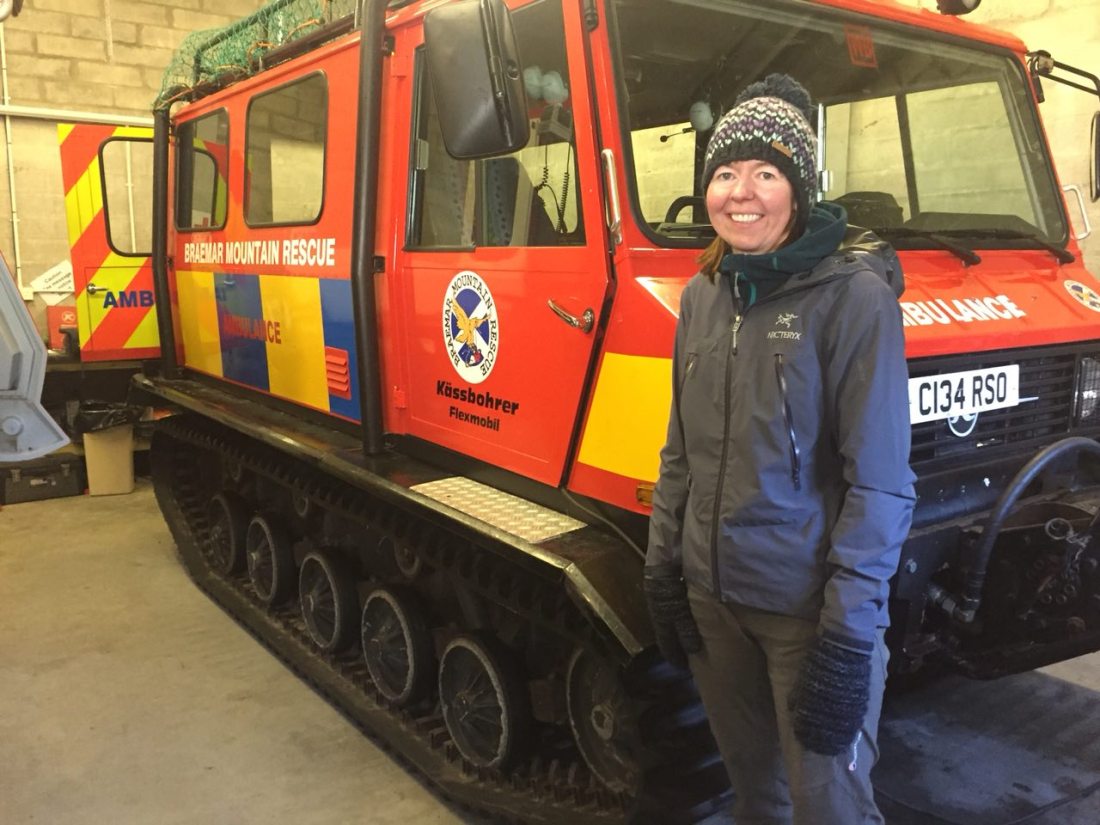 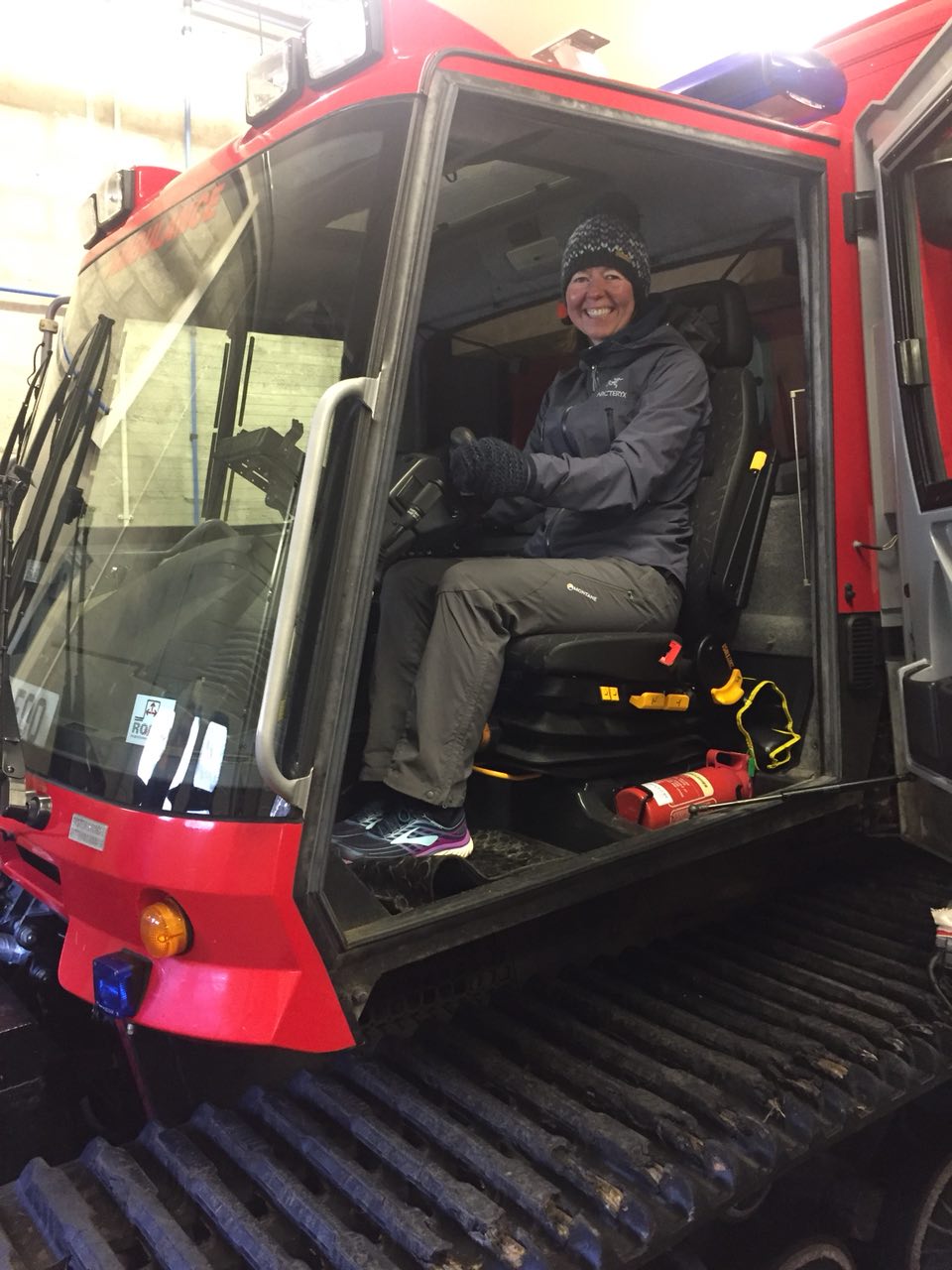 The next part of the day involved a tour of the station itself and a look st the rather impressive equipment and vehicles used by the team. I often have a wee moan about the weight of my rucksack, especially if I’ve not had it on for a while. Never again! I have no idea how these folks find the strength to carry this amount of kit up the hills – no wonder they speak so highly of the helicopters that sometimes assist!

Prior to heading out we had our crampons checked for fit and helmets issued for safety during training. Thereafter, we got a wee jolly in the Landrover. This was rather fun. I’ve often wished for a lift when walking in somewhere, and it was great being driven along the track to Loch Callater. A wee bit snowy in places it was interesting to see how the vehicle to some degree slipped around like any other car, the upside being a much greater clearance level!

Heading off to practise our winter skills, the main purpose of the day with my newly acquired (Christmas presents), ice axe and crampons, I was very much in the camp of ‘all the gear and nae idea!’ Under the careful guidance of Nick and Derek we had the opportunity to try out a range of techniques from moving along the hillside safely and using the ice axe to create better footholds, to ice axe belay and ice axe arrest.

These techniques were practised without crampons for safety. The reality is that you probably would be wearing crampons if encountering a situation where such a technique was deployed, but safety first in practise means no crampons to lessen the risk of bodily injury and expense of ripped clothing! The arrest technique in particular is one that I need to practise further so it may well be the case that as Bruce heads off up a munro I genuinely am found playing near the car park, sliding head first down the hill.

I’m aware that carrying an ice axe home from town requires a bag as it’s classed as a weapon in this context – perhaps one of the team could enlighten me as to whether sliding down the hill in the park practising an arrest while the local kids are sledging later in the week would be considered inappropriate? 🤣

This done, we stopped for the aforementioned lunch before getting the crampons on. This was another learning opportunity, practising using the ice axe to create a platform for standing safely on the slope, with reminders to keep your kit safe at this time. Very useful for someone with little common sense who would undoubtedly otherwise be seeing her rucksack slide out of view! 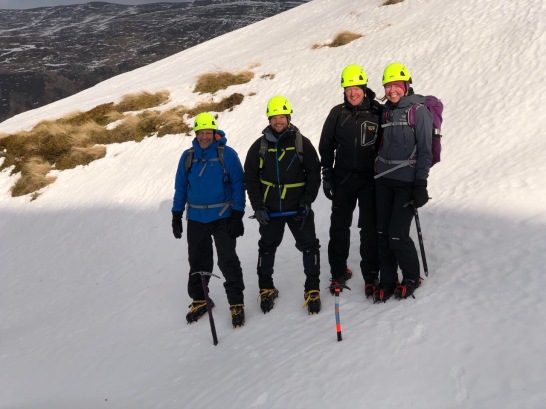 The lessons continued … walking up, down, and along the hill with crampons, before heading down a steep, albeit short, descent. At this point we were shown how to use the ice axe and crampons to descend safely backwards, then climbing up again (front pointing), to be informed that this would be a Grade 1 climb. Usually someone who would rather take a mile detour than face a scramble if at all possible (much to Bruce’s displeasure) I was somewhat chuffed with myself, although as Bruce said, it’s amazing how much more comfortable you feel knowing you’re out with the MRT! 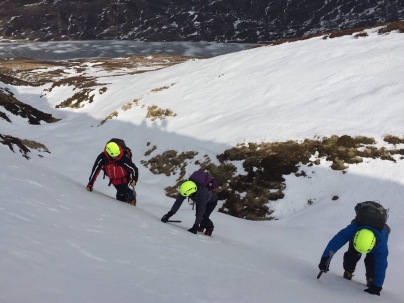 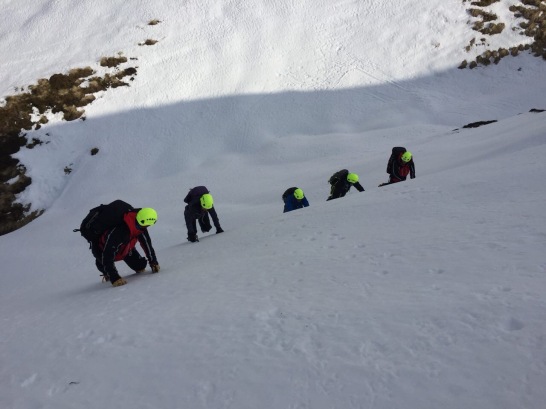 More play in the snow ensued, now learning how to keep warm and find shelter for bad weather or emergencies. We dug out holes in the snow – not bad for 10 minutes effort – and I learned the importance of keeping your legs lower to ensure you’re not forcing cold blood back towards the heart. Derek’s was the most impressive effort, but he had the advantage of a spade! Perhaps the next purchase might be a rucksack twice very the size of my current daypack!

Finally we meandered back down to the vehicle to pause for photos before heading back to the centre. Another cuppa and some final chat saw the day come to an end. 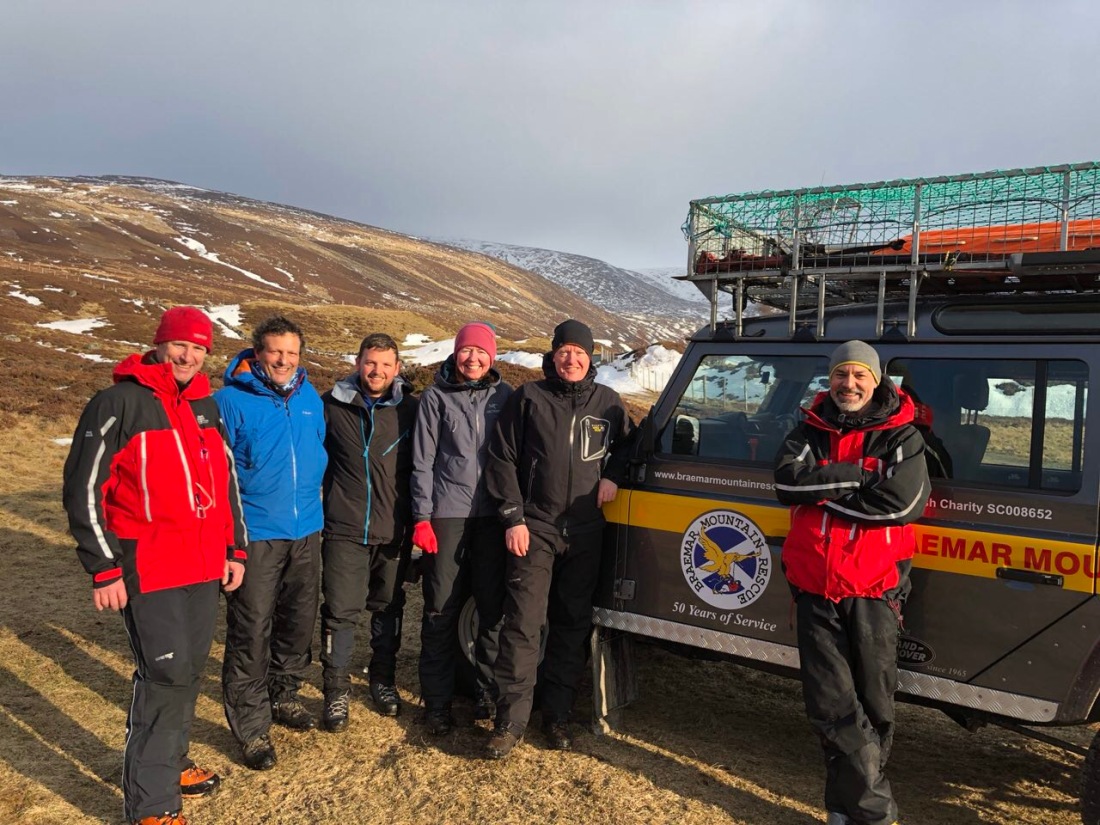 I’d like to say a massive thank you to Nick and Derek for giving up their team training today in order to take us out. I thoroughly enjoyed it, as did Bruce, and I very much enjoyed the opportunity to talk to you, hearing about your experiences and learning so much in such a short space of time! I will certainly check out the BMC videos you recommended as I’m sure they’ll make so much more sense in light of our training today. Thanks for such a brilliant experience!

Safe travels to you all!