I’m delighted to report that I’m still pain free! My previously mentioned Christmas miracle in the form of a (very expensive) cortisone injection has paid off. I’ve slowly been building the miles up and have now ran around 20 miles a week for a couple of weeks, with no heel pain. Any signs of plantar fasciitis and swelling have gone. A tweak to my orthotic insole (Version 2) courtesy of Shand Podiatry will hopefully ensure that my heel spur is comfortably accommodated and does not cause further issues.

What I have experienced though, with the heel relief, is forefoot pain. Having struggled with pain post-run for a couple of weeks I decided to see to this sooner rather than later. Back to see Scott at Shand Practice,  and a small inexpensive tweak sees orthotic Version 3. I’m very happy to report that’s early indications aware good. I have no forefoot pain after two runs in them, my only gripe being a near blister after 9 miles today. Why did I think it was a good idea to do 9 miles on modified insoles without even a whiff of BodyGlide to ease things along?!

Yesterday should have seen us on a winter skills course. However, there’s been too much weather of late, and thankfully the decision was made to postpone due to 70 mph winds not providing an optimal learning environment.

Instead, I decided to head for Aberdeen parkrun. Driving down I did admittedly have second thoughts as the temperature dropped and the rain became very sleety. However, on reaching the prom the rain was almost off and a group of running friends happened to come along – perfect timing! The wind paled into the background as the chat took over. Turning onto the lower prom it was, as is often the case, an entirely different experience. The wind was gentler and the sky was blue, sun shining down and warning me up nicely. I even contemplated ditching my jacket and gloves, with the knowledge that this was an ‘easy’ parkun, no speed required – I do like a plan.

Waiting for the briefing I saw my sister and niece, offering my niece some of my clothing as she was feeling the cold whole waiting. Hindsight is a great thing: I bet she’d have taken it if she’d known what was ahead. The darkening sky (think black rather than blue) looming across the bridge made me slightly apprehensive so the clothing stayed on.

The Run Director shouted, ‘Go’, and it wasn’t just the parkrunners that started. Very quickly we were being battered by very cold sleet / snowy stuff and a side wind that compounded the biting cold and wind and low temperatures. Most unpleasant!

Having opted to run / walk with my sister, I think we ran more than intended just to keep warm and get it done. We got completely soaked down one side, turned and had the joy of the other side being soaked too. Had my car been anywhere other than the finish I’d have gladly forgone my run credit and bailed.

Then as swiftly as it started, the precipitation ceased and the sky turned back to a beautiful, clear blue once again. Another few miles might have seen us dry, but instead it was shoes off and clean socks on at the door of the Brig O’Don before the post run breakfast and chat.

In complete contrast with yesterday’s run, today was glorious for joining some of the Metro ladies for a social run at Scolty. For once in my life I was early, so I opted to run a couple of miles to warm my legs up, bumping into Kirsty (Chief Organiser and Queen of the Trails) midway.

Back at the car park, we met the other ladies, a small select band with 7 of us in total, and were briefed on our route. Setting off, I was very happy to bimble along at the back. Speed is not my strength at present and the chat was good. As we settled into our paces the gap never grew too big, everyone mindful of the instruction to stop and wait at key junctions. 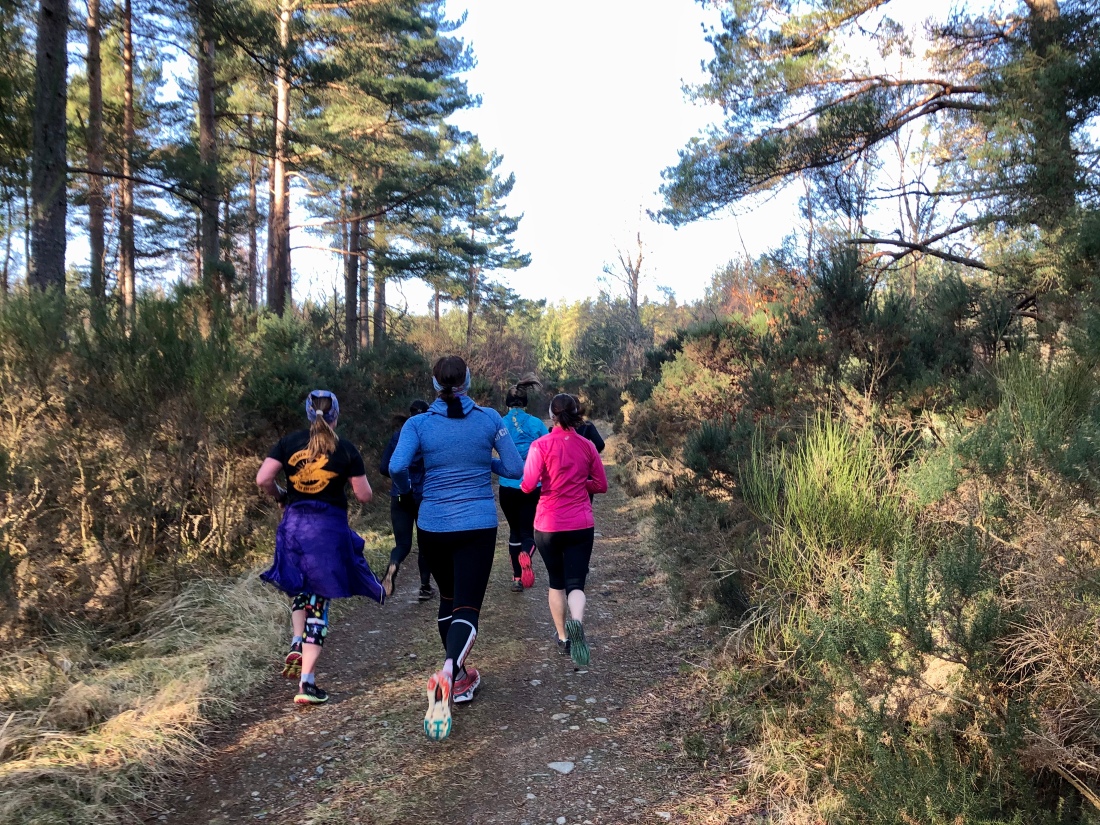 It was a beautiful route, mainly on fire roads, initially heading down and then following the River Dee, before ascending gradually up through the trees to encounter lovely views.

Continuing up, we reached our highest point on the route before a lovely, well earned, descent.

Finally, there was a short ascent to finish and Kirsty guided us up through a narrower path with more underfoot interest, thus taking the mind off any effort involved.

A fantastic run, thoroughly enjoyable, and great company to boot, ended perfectly on Ride Coffee House in Banchory with carrot cake to die for!

Roll on the next one! Never mind the route, let’s just make sure the coffee meets the standard set today!

One thought on “What A Difference A Day Makes: Aberdeen parkrun and Scolty Trails”