Having felt like I’d not slept at all – no idea why, but I saw many hours on the clock – we set off from Rowardennan in the knowledge that this would be a tough day. The route largely hugs the lochside throughout, climbing gently up and down, over stony boulders and tree roots. Our first photo stop was just outside Rowardennan.

The path was fairly good initially. Then the choice had to be made – low road or high road. There really is no decision: the low road hugs the lochside as far as possible, undulating according to the tree routes, erosion or terrain, while the high road follows the fire road, rejoining further along.

We met one of our fellow walkers on this part of the route and enjoyed some chat. Although the cloud was very low, the worst precipitation we encountered was a very fine drizzle. Not enough to give us any cause for concern, but just enough to play havoc with my hair! Already suffering from the change of water, I finished the day looking like I’d been dragged through a hedge backwards- several times!! 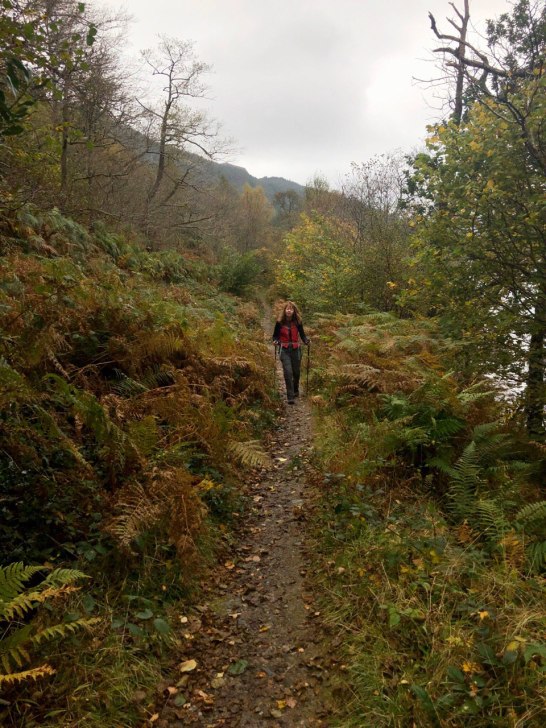 Up and down we went, small undulations, never enough to be bothersome, but sufficient to ensure care was needed to avoid tripping on roots and stones. 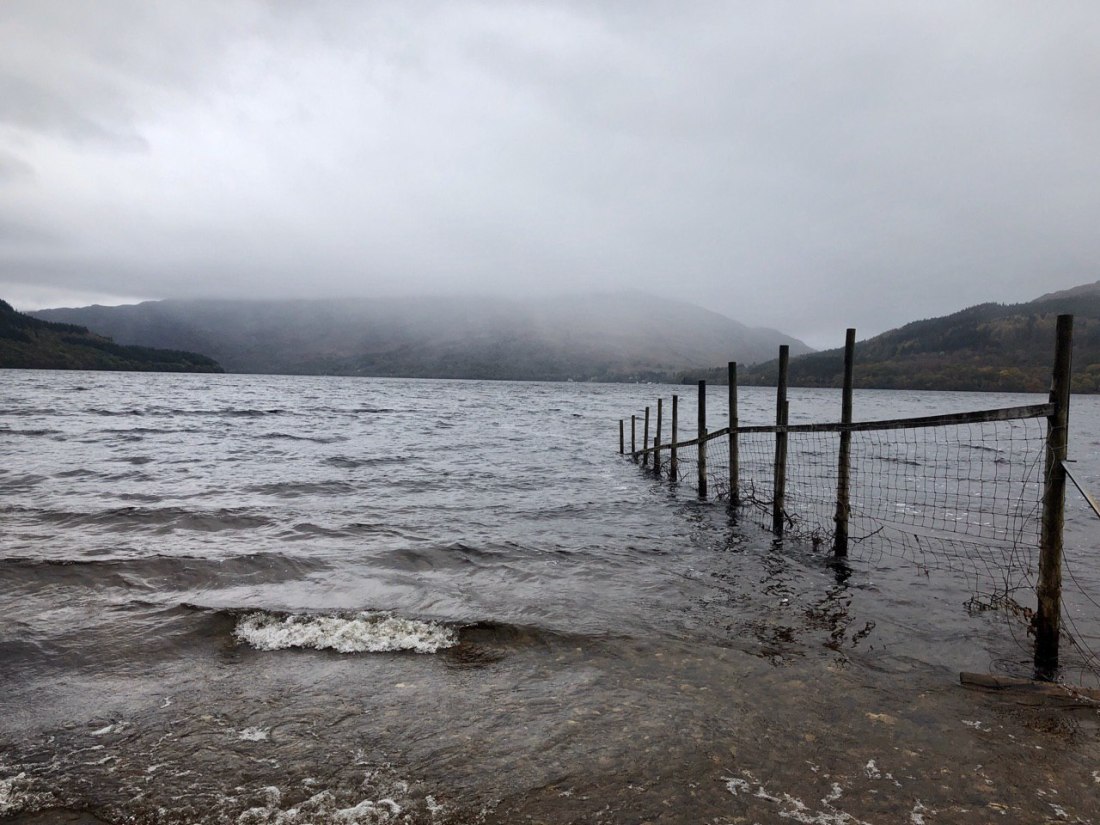 This continued for a number of miles until we finally reached the Inversnaid Hotel. This has been refurbished since we last visited and now has a really welcoming walkers entrance, featuring storage for rucksacks and boots with CCTV from all angles, and an area where you’re welcome to eat your own packed lunch. We opted instead for scones and coffee – a very tasty treat, and a lovely pick me up.

Leaving Inversnaid the toughest section of the Way is reached. This is due to the technicality of the terrain. It’s significantly more rooty and bouldery than the previous section, again with single track paths, and these frequently rise and fall as progress is made. There are also umpteen bridges, steps and even a ladder. It was at this ladder that Bruce dropped one of his poles while taking a photo, then having to climb down a drop to retrieve it!

When all of this was past, we came towards the Bothy at Doune. Here we saw a man looking intently at the hillside from various vantage points. I waved at him and he acknowledged me with a friendly wave, continuing searching through his binoculars. As we took photos, also taking some of our walking buddy for her to send to family in Canada, he approached and I had to enquire as to what he was looking for. (Facebook page: Doune Cottage)

Cue, the most enthusiastic discussion in some time! He’d bought a derelict house, retired from work, and made it a project to completely renovate it over the next few years. The house itself has a really interesting and colourful history, but has fallen on hard times through neglect, and it’s going to be brought back to life through a real labour of love, providing a home for years to come. The fact that the only access is across the loch or along the Way is no issue. I do look forward to following the Facebook updates and seeing how this progresses.

Inspired, we continued and headed up the end of the loch to the high point that affords stunning views all the way back. Shortly before reaching this we saw a few of the feral goats that live on the lochside including a cute little kid. If we hadn’t seen them we’d certainly have smelled them; they were rather fragrant to say the least! 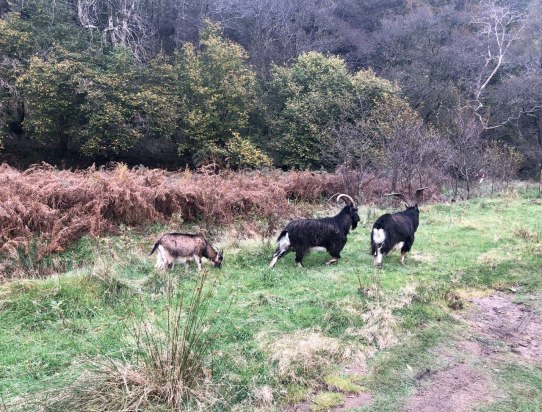 Finally we made our descent into Beinglas campsite, enjoying a quick drink before embarking on the final leg of our journey.

Here we had to phone for collection to the Drovers Inn as the bridge across was taken down by flooding in August. Waiting for another couple of friends from the Way our plan was to head back together. Unfortunately on pick up it appeared our transport was oversubscribed so it was an interesting journey to say the least! Let’s just say I now know what it feels like to be a sheep!

A fantastic evening was had in the Drovers, enjoying the company of people from the Way and others visiting the Inn as tourists. 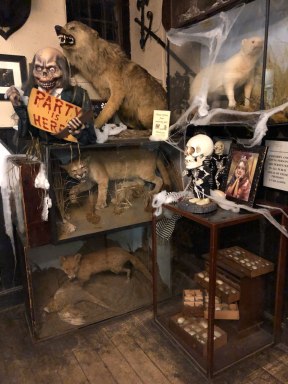 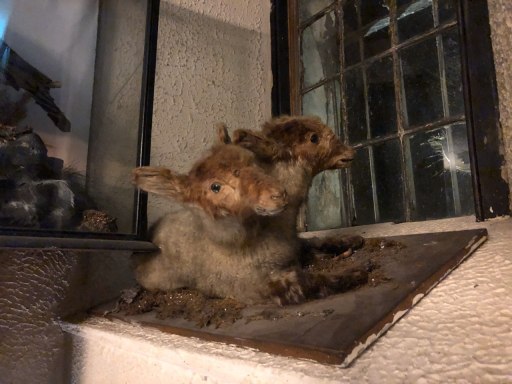 Day 4: Inverarnan to Bridge of Orchy
We opted for an early start today for two reasons: firstly, we had a long day ahead, and secondly, there was rain forecast late afternoon and we hoped to stay ahead of it.

We met fellow walkers at breakfast and I thoroughly enjoyed my porridge; it tastes so much better when properly cooked in a pan!

A quick turnaround saw us out of our room and deposited back on the West Highland Way by 8:30 am. Deposited just at the start of the Way, we missed out a very short uphill section from Beinglas. However, we drove it last night so no great loss.

It was good to be on better terrain again. We made good time from the outset, enjoying the scenery, more able to drink in the autumn colours when not having to focus on our feet.

Ahead, we were aware that the bridge at Derrydarroch had come down during the flooding in August. This meant another diversion and we’d been advised that fording the river would be challenging due to the drop on either side. 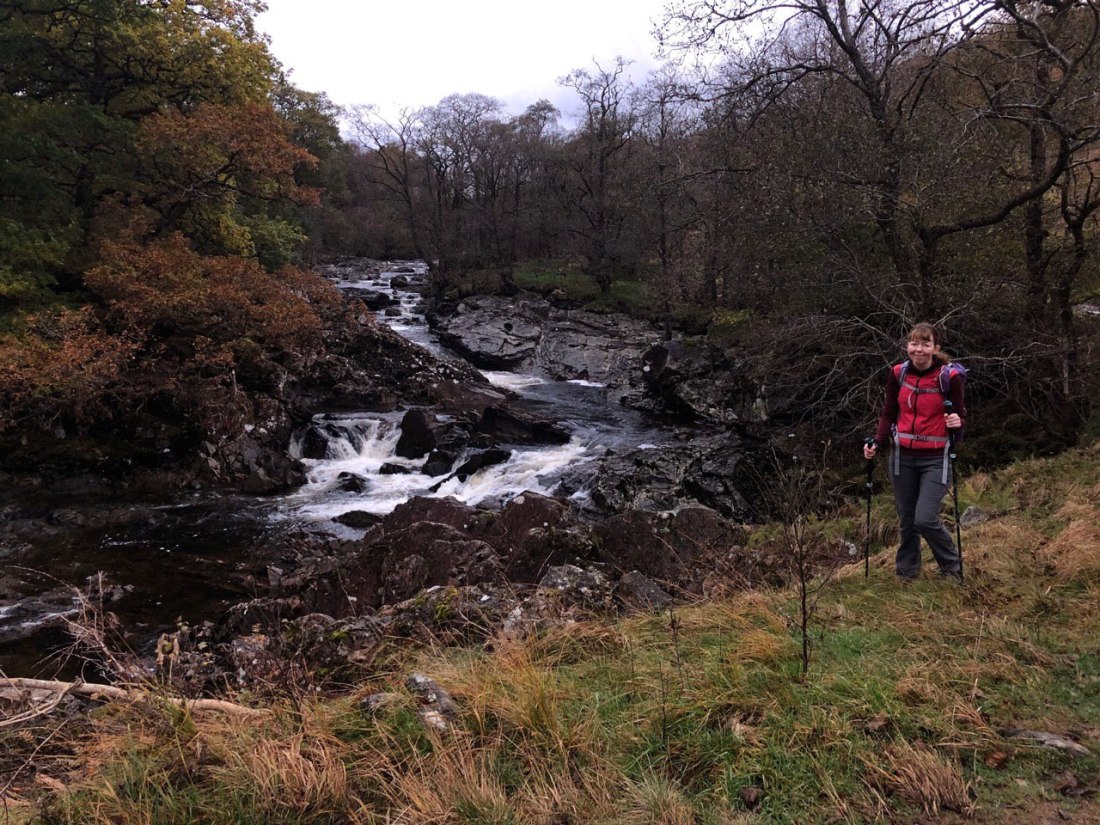 In the event we were pleasantly surprised. A lack of rain meant that the water level was really low and crossing was easy. How the lad we’d met earlier had fallen in baffles me! Unless he’d gone straight off the ‘bridge’ at which point the water was pretty deep, but easily avoided by walking a few feet in either direction.

Further along, the good trails continued although sadly the evidence of the flooding also continued. As we approached a wee cottage, Bruce wondered how close the water would have come. Sadly it appears it might have gone straight through it.

The scenery continued to reward us, staying ahead of the cloud and only being subjected to a very light spot of rain on occasion. At no point did we consider putting our waterproofs on, such were the favourable conditions again.

The route, in our minds, was split into several sections, including sheep creeps under railway and road.

Following this section the path condition greatly improved with a section of newly laid track. I believe there’s been some controversy around this as it looks very manmade, but the upside for us was that it made good terrain for tired feet.

Our next target was the wigwams at Strathfillan, plan being to stop for a coffee break. We ambled along happily, sometimes having a song or two to keep us going. Luckily we both have a shared humour as at times this got a little silly. Just as well we were on our own!

Just ahead of the farm we saw the Crianlarich munros and I was delighted that I could say I’d done them all. The wigwam shop was very welcoming and the coffee and millionaires shortbread went down a treat. As always, food in the great outdoors is the best! 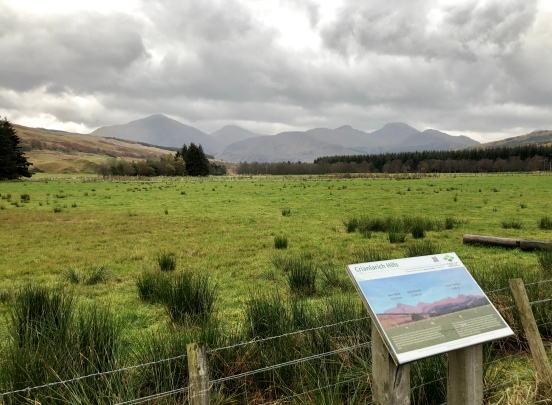 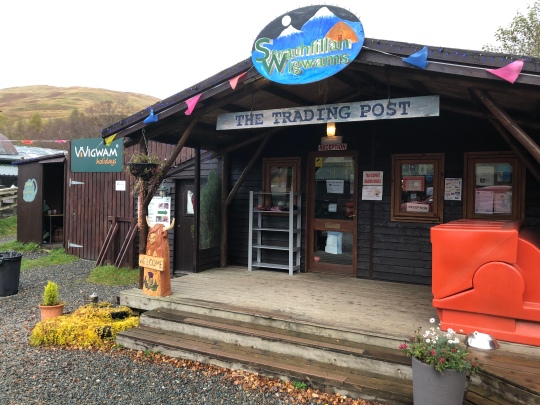 Not long before this, we’d met an American couple and enjoyed some good chat as we walked. As with running, it’s amazing how quickly time passes when you’re engaging in conversation. They passed us when we were stopped at the wigwams, but we later caught them again and we walked into a Tyndrum together. The first shot was captured just ahead of Strathfillan, the second the awkward cow that refused to pose for a photo at Strathfillan itself!

A gentle walk alongside the river took us into Tyndrum through the community woodland. I love this section – some lovely trails that would be fun to run if this was your local stomping ground.

Passing through Tyndrum we resisted the urge to stop, either to drop off our rucksacks or for coffee and cake, the fear being that we might not get going again. As we headed out we heard sirens; sadly these became frequent with multiple emergency vehicles passing by on their way to a serious road traffic accident. This led us to reflect on how fortunate we are to be on the trails, experiencing the scenery and the weather, adverse or otherwise. 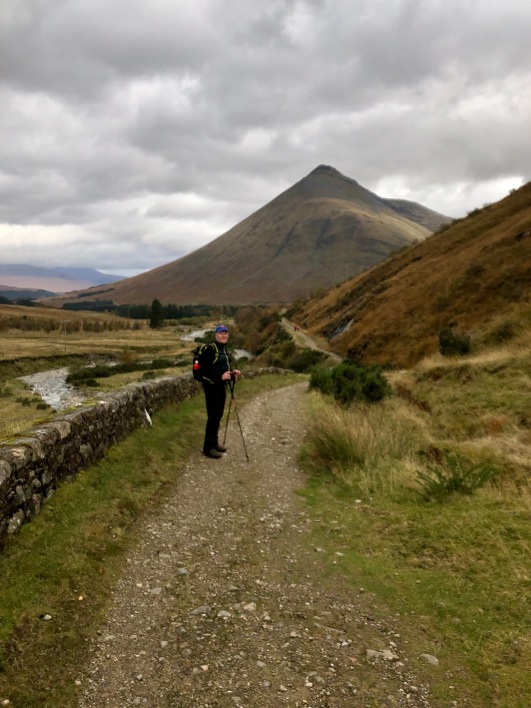 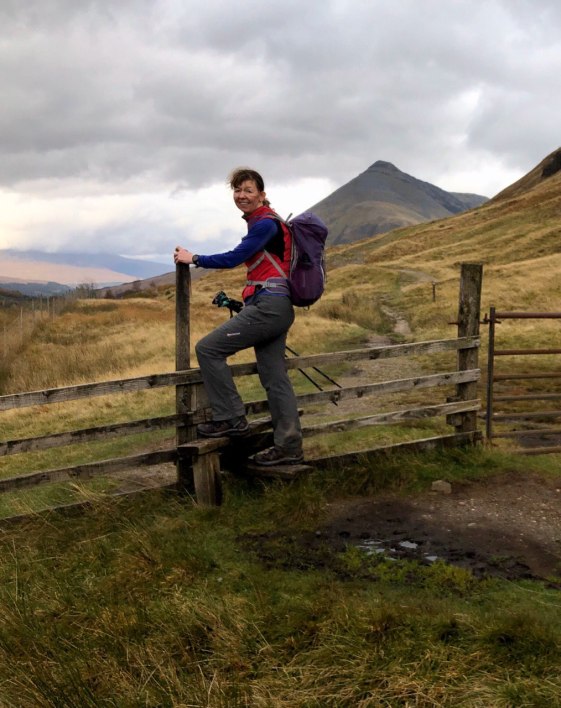 Our journey ended in Bridge of Orchy with a few hours to pass ahead of the train back to Tyndrum. Fellow walkers ambled in and it was a pleasure to chat with them, exchanging stories of the trails.

Safely back in Tyndrum we’ve now eaten and have caught up with other folks from the trail. Next step, bed!

May you all travel safely wherever the road takes you.