This was chosen as our first munro of the week as it’s short and a simple up down – allegedly.

A clear parking area was located just after a very clear sign showing the access path to the hill. We donned our boots, fixed ice axes on the rucksacks and headed off – that sounds very swift; in actual time we probably faffed around for 5 minutes. We then quickly realised just how warm it had become and more faffing ensued as layers were shed. In contrast to last time we were out, we were comfortably in base layers until well up the hill. 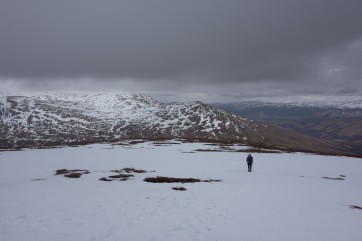 The path was decent, albeit a little wet and boggy, gaiters on though, we were unperturbed. The snow line was high, around 750 m, and we were fortunate in that even at this level it was quite patchy. It was only towards the final pull that we swapped poles for an ice axe just to be safe, and managed to the top with no need for crampons, the snow being pretty soft.

On reaching the dizzy heights of my 111th munro, Bruce asked, “How many munros have you done now?” 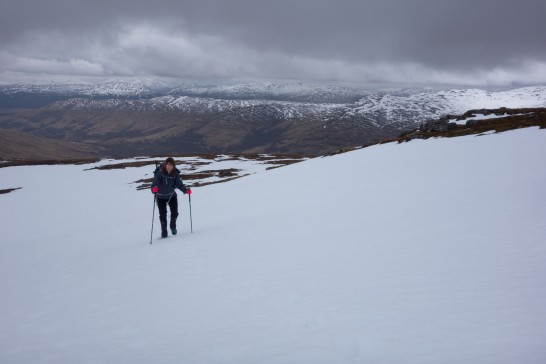 This is a standing joke as I’ve usually got no idea and he can tell me as he remembers things. On this occasion though, as I replied correctly, a little voice in my head queried whether you’ve done the munro if you’re not yet back down. Hold this thought!

Heading downwards we retraced our steps (and those of others who had passed through previously), making our way through the snow with relative ease. Off the snow I stopped for a comfort break and Bruce carried on. I couldn’t have been far behind him, but lost sight of him. I blew my whistle and shouted but no response. I lost the boggy path. Meanwhile, he’d gone a little further down and realised he’d lost me, also shouting and getting no response.

Thinking I’d come upon him soon I tried using OS Locate to get an exact pinpoint on the map – it didn’t work. I had a compass showing but no grid reference. On return to the B & B, having reinstalled it, I now realise that you need to give it access to location services on your phone. Oops!

Anyway, with no ability to get a proper reference point I vaguely orientated my map in line with where I’d come from. I then made the mistake of following what I thought was the main burn – it was in fact a small tributary but everything’s bigger just now with the snow melt – and ended up back at the road as planned, but a mile or so up from where I should have been!

Despite the unfortunate turn of events this all turned out okay. A minor feeling of panic as I descended wondering where husband was had been reciprocated as he shouted and retraced his steps to find me. As I saw the car coming into view I hollered and blew my whistle, just in time to catch him about to embark on the next ascent. For once, timed to perfection!

Having debated last night which walk to do with concerns of streams in spate and marshy ground due to yesterday’s rain we settled for the above munros. As we headed up the boggy path we did briefly question our judgement; the marshy grass was slow going and a steady incline meant that although we were gaining height it was neither quick nor easy. 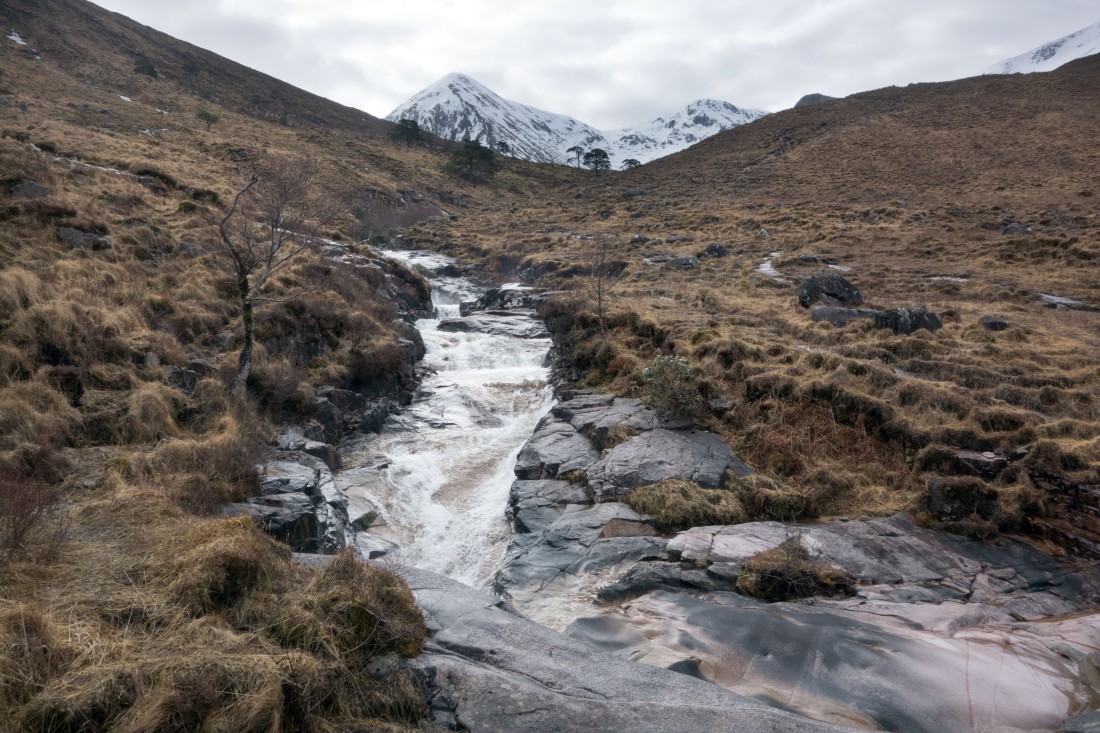 Continuing up we had to cross a series of small waterfalls and streams. The main issue here was snow – although we could hear the water flowing we were in effect walking over it, hoping that the snow was still firm enough to hold our weight. We wouldn’t have come to any real harm as the water would have been shallow but walking with wet feet’s not particularly pleasurable! Thankfully we reached the bealach dry. 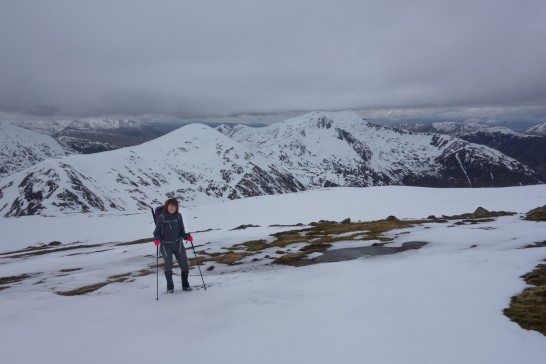 The true ascent then started with the top of Stob Coir’an Albannaich in sight. We followed the curve of the slope up and around, and I was grateful to Bruce for taking the lead for much of this. It’s far easier following in someone else’s footsteps rather than having to break trail yourself. The snow was fairly soft and for the most part the walking was fairly easy. The thing that played on my mind was the steep descent to come between the tops, as per the Walk Highlands route guide.

Reaching the summit cairn we stopped to admire the views which were stunning. The cornices along the top of the ridge were very apparent and I really did start to worry about what lay ahead! Having checked the map and route guide the line of descent became clear and it was somewhat steeper than I’d have liked.

Initially we dropped down to a bealach. This proved manageable once started despite looking (to me) quite horrific in the beginning. The next step was to find the rake that lead down to the next bealach: it was steep but the softer snow allowed our feet to sink in. Alongside the comfort of the ice axe it quickly saw me reach the floor of the bealach, although if I’m honest I did have a feeling of panic at the start of the descent from the cairn. The upside of heading for a bealach is knowing that you will stop if you slide. This was the fear higher up – how far down would you go, and what might you hit, before stopping!

Bit of a thought having to descend from the peak above 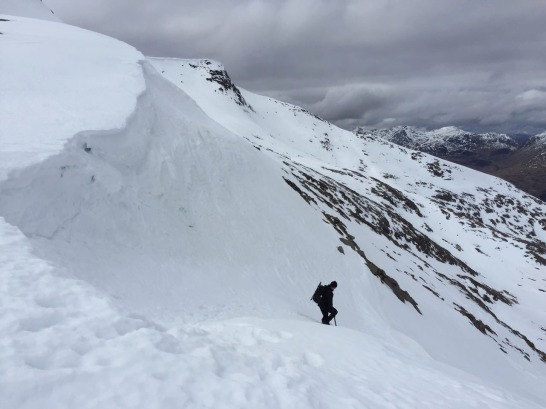 The walk to the second munro, Meall nan Eun was easy. We ascended a peak between, Beinn Tarsuinn, which was a pleasant walk with gentle incline compared with what we’d done previously, followed by another short descent and the final push up to the munro. It proved stunning as the views around were breathtakingly clear. 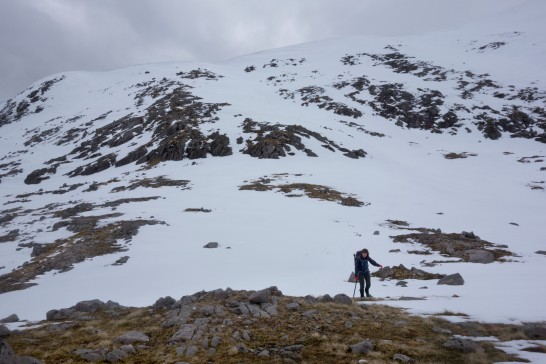 During the ascent we’d had a brief spell of gentle rain. This may have added to the chill as prior to this we’d been warm; however it happened, we chose not to linger too long as the cold was noticeably for the first time.

Heading back across the plateau we had another descent to tackle. This was an experience indeed! Essentially we had to drop down the steep crags (snow covered) and lose height quickly. Bruce led the way and I followed in his footsteps again. However, at one particularly steep section he suggested I’d be better going a marginally different route as it may prove easier. I found myself frozen to the spot, terrified, as I became very aware that the soft snow may well give way beneath my feet resulting in a slide downwards! Bruce was somewhat surprised by my polite request for help, and calmly coached me to use my ice axe to hold the position, dig my feet in and go sideways. Having succeeded with this I was then able to get moving more comfortably again, all the while being given gentle encouragement from below – my hero!! (He later told me that he could tell I was scared so figured not to crack jokes or take the mickey!)

Back on the grass, although we still had a good height to descend it felt easier. The ground was much better than the route up with a decent path; despite the boggy wet conditions in places we made good progress. A few small waterfall and stream crossings eventually took us back to a land rover track and after this it was only a short walk back to the car.

A truly joyful day in the hills again: felt like I was pushing my limits at times but looking back I’d do it again.

Opting for a shorter day, we decided to try Ben Challum. Despite being short this hill was a hard slog, climbing steadily after crossing the railway line across boggy ground. The snow, as we progressed, took care of the bogs and again we were able to walk across covered streams and areas that would otherwise have been unpleasant.

The views further up are said to be quite spectacular but sadly we didn’t get to appreciate them. The cloud was low and it became very foggy as we approached the top. The snow line was higher than it has been (around 900 m) and again the snow was slightly wet allowing the feet to sink in making progress easier, particularly on the descents. A familiar story, ice axes provided security for self belaying, but crampons were just extra weight in the rucksack, along with the Microspikes, spare gloves, down jacket, base layer, hat and 2 buffs!

As the snow got deeper I had a fleeting moment of thinking maybe this is as far as I go. However, Bruce assured me that we were within a few hundred metres of the summit. Problem was that you couldn’t see the summit, and with the route guide describing a cleft on the ridge I was worried we’d fall down it! It transpired the cleft wasn’t too big, we didn’t fall down it and we did get to the top safely. On this occasion the return leg was far easier, retracing our steps back down.

As we descended the sun attempted to break through and the route opened up to show views back down. It’s amazing how much less steep and scary something is when you can actually see it!

Another one done, and I feel done!