I can’t quite remember why I signed up for Loch Leven Half Marathon; the only thing that springs to mind is that it was just to give me a race in the build up to my main goal, Fort William Marathon. It’s also a race I’ve only done once, way back in 2008 when I was training for my first marathon.

As it turned out, the Half fell on a weekend where my plan said I should run 18 miles. Those of you who know me will understand that I love a plan and will generally run the miles specified, unless of course I’m injured, so 18 miles it was. If you want to be really pedantic it turned out to be 17.96 miles, but I can live with that! I went a tiny bit over in other runs during the week so it balances out.

In light of the mileage I decided to make a night of it, staying in Kinross to ensure I would have fresh legs without the stress of a morning drive. While the Travelodge at the Kinross Services was not quite 5 star, it served my purpose well – cheap and quiet with a very comfortable bed, I zonked out early and fitted in 10 hours sleep! Despite this, I was still tempted to stay in bed for a few more hours.

Breakfast in my room was hearty – a porridge pot, banana, and pain au chocolat, washed down by peppermint tea and hot water. I’ve no idea after that why I was worried about having enough energy to make it round 18 miles! That’s probably enough to see several people round.

Setting off later than planned due to my bad time keeping – the more I have the worse I am, and I’d gotten engrossed in my book rather than heading for the shower – I made it to the Community Campus just before 10 am for registration. This turned out to be cutting it fine as the car park was hoaching so I ended up across the road at the medical centre, figuring it was Saturday and they’d be closed. I took advantage of running from here to registration, then having a minor panic as I had no idea where the start was and worried that I’d not find it when the time came if I went running due to my lack of directional sense. As it was, it was well signposted and there was no way you could miss it. I therefore headed along in that direction,  continuing round the town in a straight line from the start before doubling back, rather than turning right or left. I bumped into two Metro Aberdeen clubmates as I ran back along the main street, Helen and Sophie, and enjoyed some chat with them before continuing on. I timed it well for the start, arriving 10 minutes before the gun, which was perfect for joining the portaloo queue and getting to the line for the starter horn.

Conditions on the course were good. It was hot but a slight breeze gave a little cooling effect. I didn’t set out with a race plan, but the intention to run as I felt, my fear being that I’d run out of steam part way round if I pushed too hard. I necked a gel prior to the start – Torq are my current favourites; although they’re sweet they are very palatable, and so far haven’t been regurgitated unlike others I’ve tried!

The miles passed steadily, I had a bit of chat with a few other runners, and before I knew it we were hitting the first incline of the day. There was nothing overly steep on the course, a few gentle undulations. The more I run the more I feel that this is no bad thing; it breaks the monotony. Another gel was taken at mile 5, just in case my hearty breakfast didn’t quite see me through. 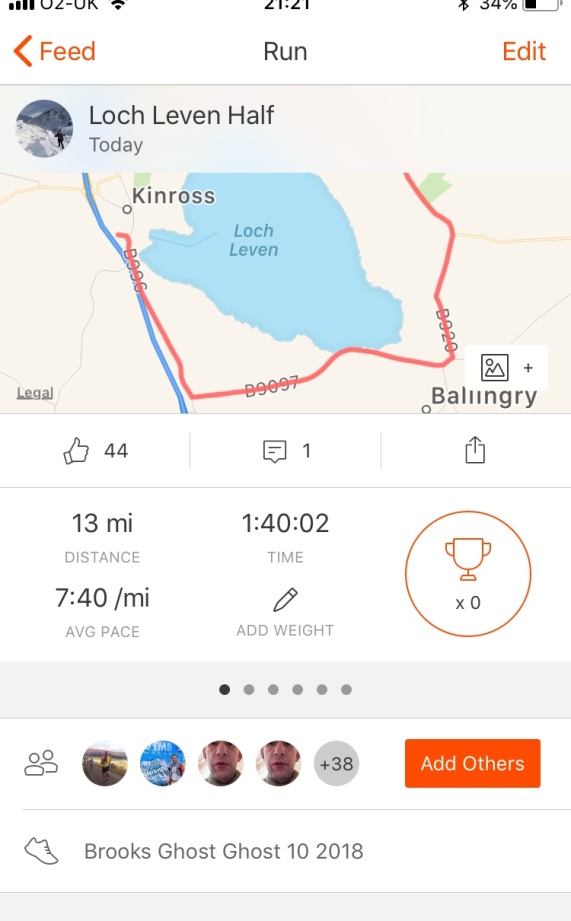 It was only in mile 8 that I felt the effects of the earlier miles, my legs feeling very hard done by as I pushed up the incline. However, they eased as the terrain levelled out and I was able to push on again. From mile 10 it was mostly downhill and this was great! I enjoyed being able to relax and stretch out my legs, passing a few folks along the way. At this point there’s always the thought that it’s only a parkrun, something I have confidence that I can do no bother.

Continuing on, it wasn’t long before the cowbells at the top of the last very short wee slope up to the road were heard, shortly followed by the announcer at the finish. I love this – it’s a great feeling to have your name shouted as you approach the finish line, and alongside the wee groups of friendly spectators and cheery marshals this really did add to the race experience.

I was delighted to see my friend Hilary at the finish line, topping to say a brief hello before running off to beat the shower queues. It was very enjoyable thereafter, out in the sunshine watching others finish their runs. Metro Aberdeen did well – good times and happy runners – and it was lovely to share the race experience over lunch with Tim, Hilary’s husband, who had also run.

Looking back at my previous run here, I took 10 minutes off my time so that was a boost. Added to that a lovely t-shirt that fits! What more can you ask for?!