The Metro Aberdeen Coast 2 Coast Relay is well underway as I write having started at 4:59 pm with the juniors dipping a hand or foot in the sea before setting off. They ran to Duthie Park, handing over to the Leg 2 runners who then carried the baton to Culter which is where we pick up.

I decided a couple of days ago that I’d run from home to Culter adding another 6 miles and giving me the 17 mile long run that the marathon plan has scheduled. For a fleeting moment I did contemplate meeting the Leg 2 runners on route and tagging along but they’re a bit fast, so I opted instead to run at my own leisurely pace, secure in the knowledge that I’d then be fit to make it to Banchory as planned.

As it transpired, I just made it to Culter in time! The forecast had suggested there was a risk of a rain shower and sure enough it came as I reached Milltimber. Knowing I had time on my side, I opted to shelter under a tree to allow the clouds to pass over. Unfortunately each time it appeared to be getting lighter it would then start pouring again. I finally got going and before long was approaching Culter Station.

Seeing the car park ahead I looked back to see the familiar Metro vests storming up behind me. No time to linger, it was literally a case of a quick hello to the assembled supporters before continuing on.

There were seven of us running Leg 3: Graham, Campbell, Alan, Grant, Jim, Vicki and I. We’d all been out on the recce run previously so knew what we were in for. I think we were all pleasantly surprised at how the evening panned out. Unlike last time when it was unseasonably hot, tonight we had a breeze and a lovely running temperature. We all agreed as time went on that it felt far easier than our recce – whether this was due to the cooler weather, there being a true purpose for the run or the promise of a post-run refreshment, we’ll never know!

We took turns at carrying the baton with Campbell leading off and Graham handing over at the other end, rightfully so as they were our group leaders and a great job they did too.

We ran out along the old Deeside line with a couple of bits where you’re routed onto the pavement by the main road and it was good to see the familiar faces of Tony and Roy out with their cameras.

All went smoothly, the chat was good, and the group ran well together sticking to the planned pace for most of the way. Before we knew it we were approaching Banchory, and determined to finish together Alan suggested we all join hands on the run up to the handover point. This put a smile on all our faces and my only concern was that we might pull over someone with tired legs as enthusiasm kicked in and the pace picked up. 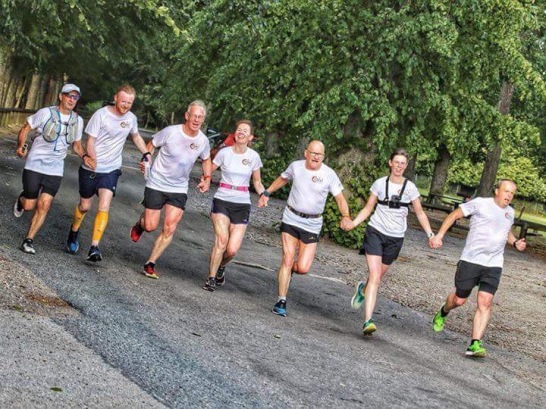 Thanks to Tony McGarva for the photograph.

Thanks to Tony McGarva for the photo.

Handover done, we then headed to The Stag for a celebratory drink before being chauffeured in style back to Aberdeen. Many thanks to Graham, Jim and Alan for driving.

Yet another of those great days where Metro Aberdeen show what a truly special club they are. Huge kudos to Tom and everyone else involved in getting this event together and safely onwards to those carrying the baton through the night and into tomorrow. A great team effort for great causes!

Huge thanks to Vicki for putting together this video montage: https://www.youtube.com/watch?v=U8Hu8skVZoo&feature=youtu.be
It’s truly epic!!