Having woken feeling somewhat reminiscent of being run over by a bus, I indulged in some gentle yoga practise to stretch out my weary limbs before breakfast – the joys of holidays!

Much refreshed, we then headed for Beinn Sgulaird. Going down the Oban road in the car however, I did feel my eyes heavy (thankfully I wasn’t the driver!) and this reminded me that I was still tired after yesterday’s epic day out.

The munro of the day was to be Beinn Sgulaird, chosen because of the clear forecast and potentially stunning views. We were not to be disappointed!

The walk got off to a good start, heading up a wide, clear track; the downside was beginning at sea level again. This gentle ascent gave our legs the opportunity to warm up before we turned off the main path onto a smaller track that would lead up the hill. This was the beginning of a pretty relentless slog up to the first of the summits. The path was dry, clear and quite soft underfoot, so aside from slightly tired legs there was nothing to complain about.

Somehow having followed the route to a small bealach at approximately half way up (in terms of height), we then managed to make our own route by veering off the main path. We realised our error when the Garmin suggested we go straight up the hillside and rerouted to come back onto the main path. (Had Bruce been the keeper of the Garmin this probably wouldn’t have happened!) Coming towards the first summit – there are two smaller summits ahead of the munro – Beinn Sgulaird itself could be clearly seen peeking out along what looked like an impressive ridge. We met a friendly chap around this point who advised that there was nothing challenging ahead, other than the deceptive nature of the distance to go.

Having reached the first summit, we made our way up and over, taking time on the descent as it was a combination of boulders and a little scree leading down to the bealach. It wasn’t difficult and that was a relief, all the more so knowing this was also our return route. The next summit, Meall Garbh, had a clear cairn and again provided some fun terrain with more steep descent and rocks to cross.

Finally, the ascent of Beinn Sgulaird itself was upon us. It looked clear, aside from the top where the route guide suggested some very easy scrambling may be required. In the event there was nothing challenging at all, only fun, and we were happy to reach the large summit cairn with stunning views all around. 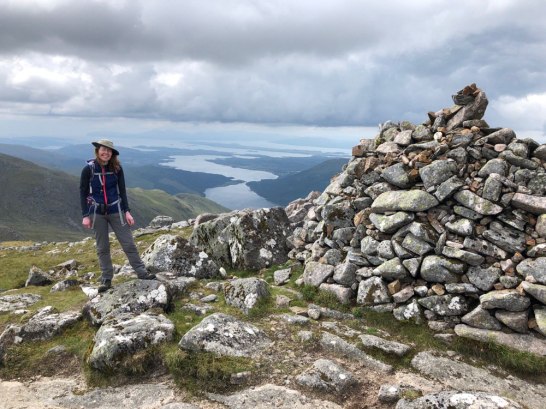 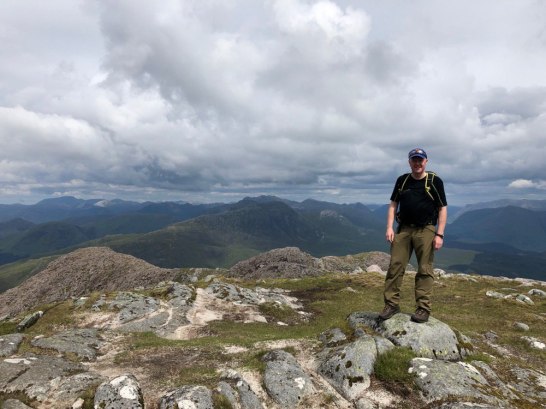 The most bizarre and unexpected sight of the day was a herd of goats! Not what you expect at the top of a hill!

A leisurely stop later, we descended back the way we’d come. Far more pleasant than yesterday and blessedly shorter, before long we’d returned to our start point. This also heralded the halfway point for me: 141 munros in the bag. Not sure where this journey will end, but as I’ve stated all along, I’ve no intention of doing them all!

Woke up to mist, light drizzle, and a forecast of heavy rain, so opted to hang around Tyndrum. We’ve both got a low boredom threshold so it didn’t take long to peruse the Green Welly Stop. Coffee was calling so we headed for the Real Food Cafe and contented ourselves for a while by watching the birds at the feeders while enjoying our cakes. We got chatting to a couple from London who were on route back home having completed the munros. A great effort – they estimated each munro had cost them £100!! That’s dedication for you!

Later in the day we decided to have a walk and took the train to Bridge of Orchy, walking back after a brief refreshment in the hotel. It was a bit drizzly and I was less than happy as it was way too hot for waterproofs making for uncomfortable walking. Tomorrow I may just get wet!