What a day! I’m delighted to have made it to St Andrews after yet another glorious day in Fife and probably the most challenging terrain of the walk.

Setting off from Anstruther I felt good. The Spindrift Guest House was brilliant – Jenni and Mark were outstanding hosts, I’d had the best sleep of the trip, was well fed and watered, and had enjoyed excellent chat about all things running and triathlon with Mark over breakfast. First scenic spot on the route was Anstruther Harbour where the tide was well out. I also passed Anstruther Lifeboat Station – huge thanks to them for responding quickly to my message last night (more on that later)! 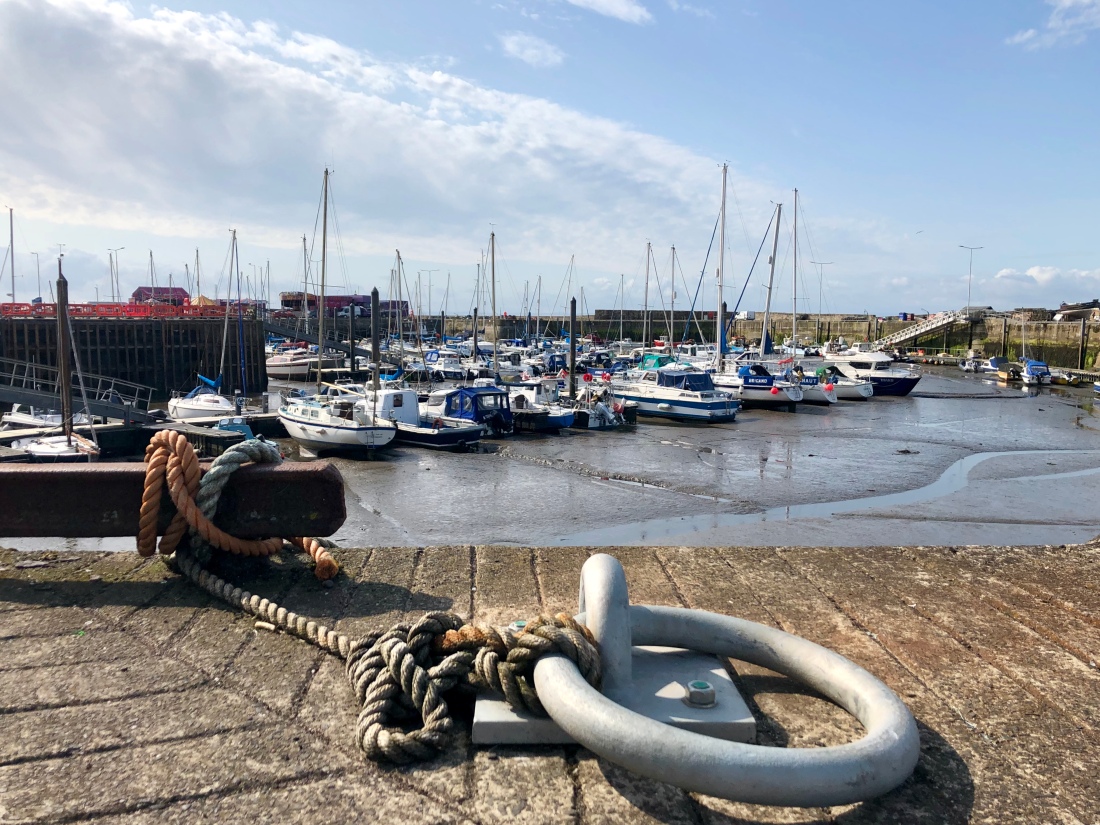 The initial trails were pretty decent. Some grassy paths, some sandy trails, but mostly quite natural. This made slower going than I’d have liked. I quickly discovered that trying to run overgrown single track isn’t the best idea as it’s too easy to turn ankles or feet; I was in this for the long game! 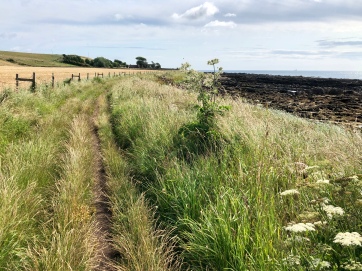 The scenery was beautiful once again. I never tire of the views along the coast, especially when the occasional treasure such as the Caiplie Caves is thrown into the mix.

I’d been informed by the route guide that Crail was the only stop on the trail, so although it was just short of 5 miles from where I’d started, I stopped for tea and cake just to be safe, ensuring my energy levels didn’t drop too much. I also bought a painting of Creel Harbour as a souvenir of my trip so it ended up being a very expensive cuppa! It will arrive sometime next week as I didn’t have room in my ultra vest for it!

Anyway, chatting to the chap here, I was assured that the tidal section wasn’t an issue. Worse case scenario he suggested I’d be able to go cross country and over the fields.

Leaving Crail, refreshed again, it was time to admire the views again. I enjoyed chatting with an older couple at the top of the village before heading through the caravan park. As always, it’s good to look back.

Again, terrain varied between sandy tracks and grassy trails. I passed an old WW2 bunker, part of the Crail airfield. Along this section the trail narrowed to singletrack and I bumped my toe on a boulder. No major harm done but I did need to extract a thread of my sock from my toenail that’s split slightly further down than I’d like! Eek

Shortly thereafter the route went down onto the shore again. There were warnings of not using this section at high tide. My dark sense of humour came to play when I saw what happens to runners ignoring this advice.

I had another short stop around here at The Toast Shack. While very tempted to have a toastie – they looked amazing – I settled for a packet of salted crisps and a can of ‘proper’ Coke. The rain started spitting here but it was welcome. The heat was quite something again despite the breeze. 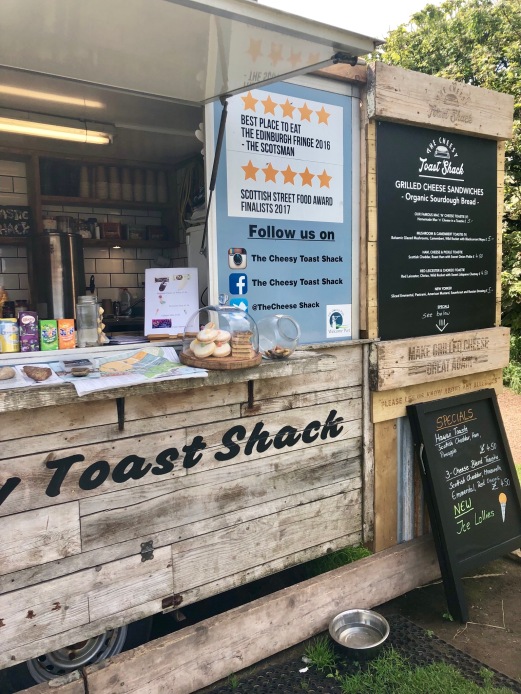 Again, continuing on, the paths were narrow and lacking clarity in places; in other sections there was some brief respite and clearer tracks. I did love the sight of the beautiful poppies growing wild in the fields and verges.

Towards Kingsbarns there was an opportunity to opt out and head towards the main road. This would make a lovely walk in itself – Kingsbarns to St Andrews – as the coastline was particularly attractive from here onwards. The golf course here was stunning! I’m not a golfer, but would happily walk this course. The path often led alongside golf courses today, sometimes very roughly at the side of a well manicured fairway. 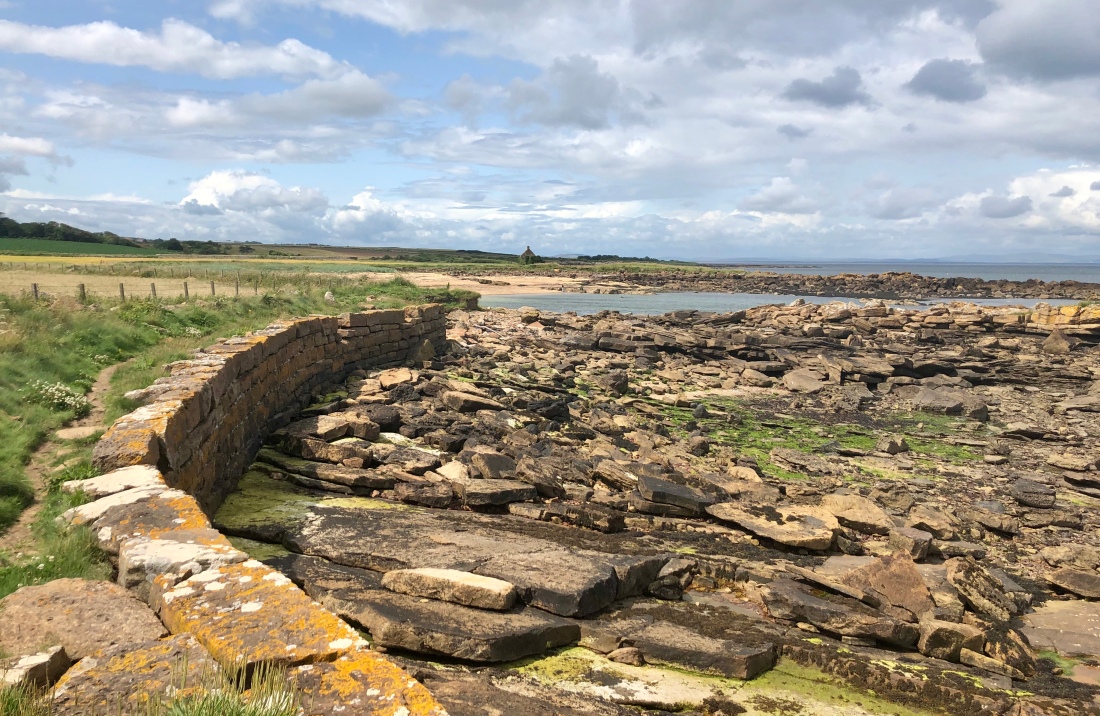 At Boarhills the track turned inland and went slightly upwards through a woodland area. I loved this! It was cool and shaded, very welcome after the sun shining pretty much continually throughout the day.

Having passed through a farm it was then back towards the shore via yet another rough, grassy track. This also involved a couple of stiles, not the most well received by my weary legs! Buddo Rock, more stiles and more overgrown paths followed. There’s a theme emerging here – going was tough and slow (again), the path was overgrown (again), and at times I was reduced to a walk in order to best preserve my feet and ankles. Unfortunately my leg didn’t fare so well and the left one in particular now looks like I’ve been mauled by a large animal! (Perhaps a slight exaggeration – very tall cat?)

Conscious of time for the high tide, I was very much on the clock at this point, hoping to reach the tidal section by 2 pm to give me a couple of hours grace. During some of these ups and downs, I found myself among very high undergrowth (as tall as me!) including something flowery like hogweed (cow parsnip?) and possibly triffids or something vaguely related. Work colleagues, you’ll appreciate ‘Walking through the jungle’ popping into my head and becoming my earworm here. If you don’t work with me, search YouTube for ‘Barefoot Books’.

Finally, I reached the tidal section of the walk that I’d been concerned about. The guidebook (and other route guides) I’d looked at had suggested that this was dangerous at high tide, going so far as to suggest waiting for the tide to recede May be the only option. This had concerned me to the degree that I contacted Anstruther RNLI to see if they could offer advice last night as I had no idea how soon before high tide I’d require to be there. Huge thanks to them for responding, especially as it’s not part of their usual patch and they were not entirely certain but gave sound advice all the same, all the more so in light of them being volunteers! A bit like Mountain Rescue on the hills, the RNLI are the unsung heroes of our beaches and seas. As it transpired, the section in question was very short: was that it?? Descending via yet another set of steps, my personal advice would be if there are waves lapping the bottom steps, turn back and take a cheeky wee detour across whichever golf course or field is at the head of the steps.

Got chatting to some more people once past the dangerous part, their kids playing on the shingly beach. Enquiring about the trail ahead, they advised that it would head up before winding down into St Andrews. Up the steps I went after the Rock and Spindle. A tough slog, bumpy paths. 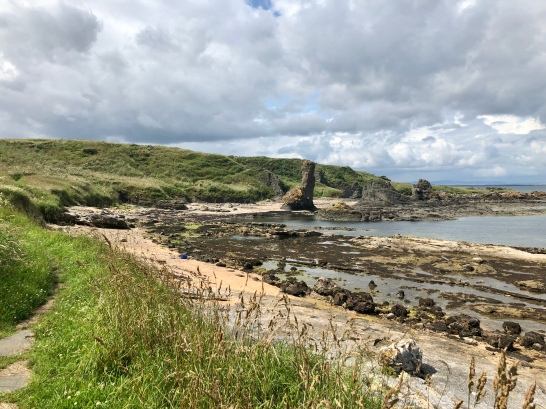 Up more stone steps, St Andrews was fully in view and it was with great delight that I made my way down towards the beach.

Having resisted all week, I could resist no longer! Paddling in the sea I felt like a big kid. I only just resisted the urge to go swimming, so good did the water feel, as I was concerned I might not get into my B & B if I turned up on the doorstep drookit! Had I realised that there would be a torrential downpour on route I might have reconsidered my options – hindsight’s a great thing!

Thus, my Fife Coastal Path trail ended. It’s been a great few days, definitely helped by the glorious weather. It’s been exactly what I’d hoped for when I originally set out – relaxing, restful and generally good for ‘me’!

Just short of 19 miles today, 63.9 miles for the week, husband arrived to meet me = one happy runner! 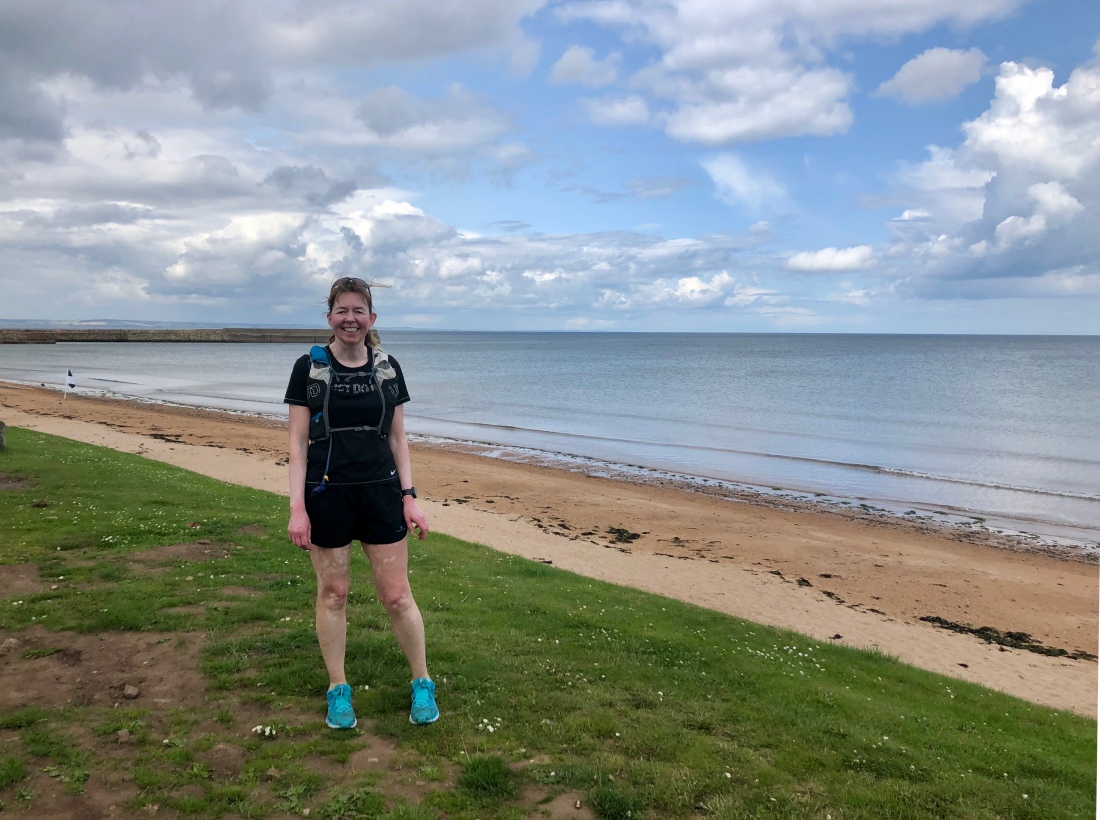