I had fond memories of last year’s Stonehaven Half Marathon and had even been heard to say that I found it easier than Peterhead Half Marathon (see recent blog). The jury’s out today though and I’ll be interested to hear the thoughts on this from anyone else that’s run both.

It’s been hot! We’re all very aware of this, and training has been hard as a result. I long for some rain! Going into the run today I had 37 miles in my legs this week, including today’s warm up of just over 3 miles. I had planned to do 4 miles but my time keeping truly is exceptional and I’d have been pushed for to get it done! Up early, I’d had porridge with banana and toast with peanut butter, practising the pre-marathon fuelling strategy. I got a little confused by timings (no great surprise there!) and suddenly realised I should be leaving the house in 5 minutes while not yet showered or clarted in suncream! Thus, I was somewhat later arriving in Stonehaven than planned!

On arrival it appeared that I had been blessed by the running Gods! There was no queue for numbers up to 100 (I was number 98) while others had quite a few folks waiting, including my regular running buddies, Ali, Alan and George, who were somewhat surprised to see me knowing that I should be out warming up. Pleasantries exchanged and suncream caked on, I headed off on my warm up, running up to the War Memorial that overlooks Dunnotar Castle. Stonehaven truly was beautiful from up high today, basking in sunshine with beautiful blue skies and lovely views to the harbour.

No time to linger, I about turned and headed back to the starting area at Mineralwell Park for a quick comfort stop before joining everyone getting lined up at the start. As is the norm now for local races there was plenty of Metro colours in the line up. This is always good to see. In no time at all we were off, enjoying a little bit of flat running before the ascent began.

Coming out of the park we met our first marshals, one of whom is a regular parkrunner in Aberdeen (thanks Lee-Ann) and they set the tone for the upbeat, friendly folks that we were to encounter along the way. A short sharp up took us away from the busy road and then after a brief respite it was up, up, up, for several miles. There were brief sections of flat or even slightly downhill, but remembering the long pull that inevitably takes you to the turning point in Fetteresso Forest, I tried to take it fairly easy and run within comfortable limits. I was joined for much of this by clubmate Grant, although at times one or the other or us drifted ahead, or behind depending on your perspective.

Reaching the forest, I advised Grant that this was the last uphill section and that we’d soon turn and head back downhill. I like this section of the course as it’s good to see the folks ahead of you passing on their way back, and as usual I saw quite a few running friends and clubmates, happy to cheer them on. This was reciprocated by those behind me and as I headed back down I received encouragement from others. As I overtook another runner she turned and said to me, “you must be Clare! Well done!”

This is one of the great things about the running community in Aberdeen – being a member of Metro Aberdeen and involved in Aberdeen parkrun you really do get to know so many lovely people!

It turns out my mind was playing tricks on me, and while we did indeed turn, it wasn’t long before we turned and went up yet again! I’d like to formally apologise for my error – sorry Grant! I think perhaps I’d blacked out the parts I didn’t like from last year.

This final up was around 7 miles, and it was the hardest slog of the run. A few folks around me had slowed to an occasional walk. I determined to keep ‘running’ in some form, however slowly, as I knew that walking would mean my race was over. I’d never get going again! I plodded onwards and upwards, and finally the route did start to descend allowing me to pick the pace up again. 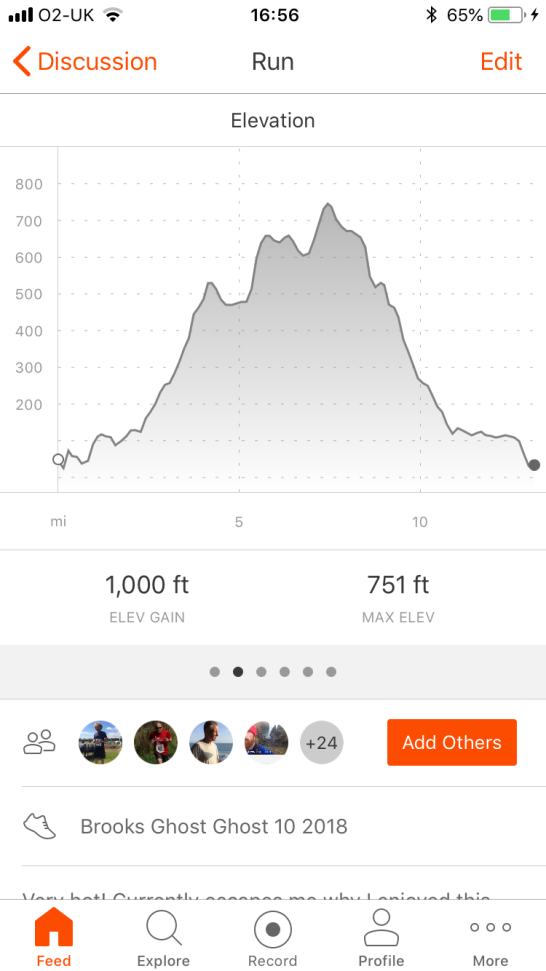 It wasn’t as fast as last year as the heat had taken it’s toll. I did manage to pick it up for a couple of miles and successfully passed a few runners. By the final mile the runners had really thinned out and there was nobody in sight to target. The spectator support around this point was very much appreciated! Any encouragement was welcomed, even if I only acknowledged it with a grimace!

Running alone felt tough and I was very glad indeed on realising that the short wooded section dropped me into Mineralwell Park again. This is familiar territory as it’s the home of Stonehaven parkrun. It’s also where I saw (and heard) Leeann again – thanks Leeann, don’t think I’ve ever been so happy to see you! A quick loop of the field saw me hit the finishing mats, delighted that it was over! Finishing in 1:45:09 it was slower than last year, however, given the conditions and the sustained training I’ve done of late I’m happy to take that.

Seeing friends and clubmates who’d finished ahead, or were coming in after me, I think we all agreed that it had been a tough day out. Great to see so many amazing performances – Kyle Grieg deserves a special mention for setting a new course record (awesome!) while his wife Debbie won the ladies race. Great also to see Ali Matthews (newly returned to Aberdeen) finishing in 2nd place, while George McPherson came up trumps for the over 60s again. I also loved the fact that the oldest runner got a prize – if my memory serves me correctly he was 77! What an amazing athlete to be running at that age. I hope to be like him when I grow up!

In the meantime there’s only one week of ‘proper’ marathon training left and the taper begins … Wish me luck!