A comfortable time after Fort William, legs suitably recovered, I decided to try Crathes Half. As per last year I didn’t really know what I could achieve, but having turned 45 earlier this month my goal was to get sub 1:41 in the hope that I’ll follow up later in the year with a time to secure my 2nd club standard in this new age bracket. The short distance is in the bag already.

I happily accepted a lift out with clubmate Mike, back from Gran Canaria to run a few races. Thankfully I’d managed to secure his entry after a minor panic last weekend (I had one job!) where the race appeared to have closed before I got his entry confirmed! It appears it was just a glitch in the website and they went on to extend entries for a further few days.

The Metro contingent were out in force today and we met lots of clubmates on arrival, an impressive gathering given all the other runs taking place this weekend!

While others headed off for a warm up, I opted for my usual pre-race routine of jogging to the toilets and joining the revolving queue! It’s amazing how well hydrated you suddenly feel before a race!

Joining the masses on the start line it wasn’t long before the off. I’ll be honest … I found the start somewhat frustrating as it was slow and I had to weave around quite a few people before I could properly get into my stride. Maybe not such a bad thing though all things considered as it is initially up as you leave the castle behind.

Determined not to let my watch dictate the pace I decided to run by feel, occasionally checking that I wasn’t going ridiculously fast as that’s always a danger early on. It felt good to be racing again. I’d been concerned that my speed had dropped in the run up to the marathon so it was good to find that a fast (for me) pace felt okay.

The second mile was downhill and this saw me running faster and passing a few people. Retrospectively, maybe the fast miles two and three were what led to the fatigue later, but at the time it felt good. Hindsight is a great thing in every aspect of life!

The sea of runners gave me something to aim for and I reeled in the odd one here and there, continuing to move steadily through the field. We headed off-road at mile 6 and with the slight descent I loved this bit, picking up pace and feeling like I was storming along. I’d happily run on terrain like that all day!

Going back onto the road was tough and my legs objected slightly, although nowhere nearly as bad as at Dyce Half. It became a bit of a slog here. I’d pushed hard and I still had five miles to go. I reminded myself that in a marathon I’d feel this way and the feeling would pass, doing a quick body scan to try relaxing the tension and focus on what felt good.

The downhill finally returned at mile 10 but I was a little more cautious, wanting to save some energy for the end recalling it being tough in the last mile. My pace was dropping and I was beginning to hurt, but took faith in the knowledge that there was less than a parkrun to go.

The final two miles were hard! My legs were heavy, breathing was not quite so relaxed and I just wanted it to be over! At some point around here I passed Graham who’s usually ahead of me but is battling an injury. Huge thanks to him for the encouragement. He told me there was a prize with my name on it and this just gave me the extra motivation needed to keep pushing.

There was another female, Kay, just ahead of me and I pushed her a bit to see what she had left in the tank. She responded by picking up pace again. This happened another couple of times before I finally caught and went past her. She very sportingly said, ‘well done Clare.’ Despite that I didn’t feel I could relax too much as I was pretty sure she’d be back before long.

I was delighted to finally re-enter the grounds of Crathes Castle knowing that I was on the home straight. I managed to pick up the pace, spurred on by the crowd support (thank you!) and the downhill finish, and was delighted to cross the line with a chip time of 1:36:55. The downside was that it was slightly slower than last year; the upside being that I was first Female Veteran. 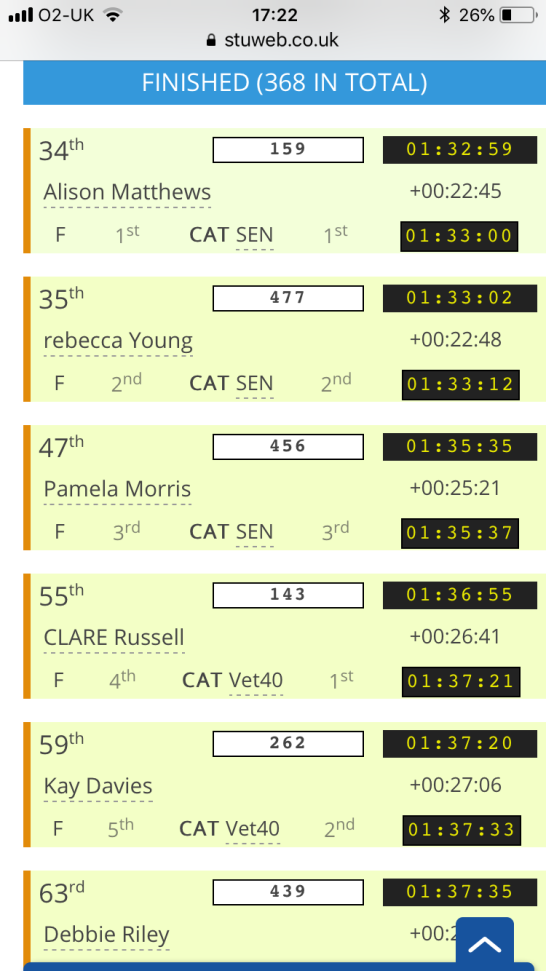 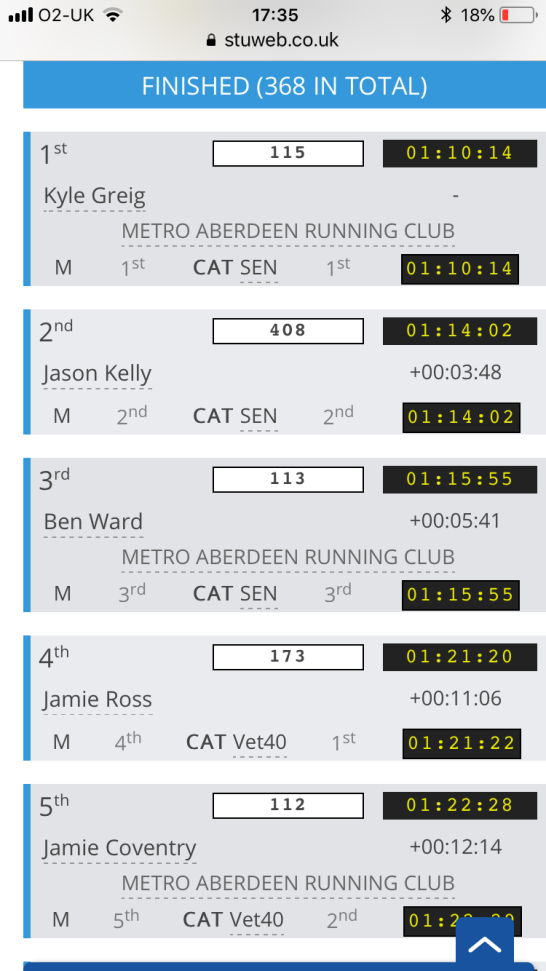 Great running by so many people with Metro clubmate Kyle taking 1st prize and setting a new course record. There was also a prize in the Veteran male category for Jamie, with Ali taking the first female prize.

Great to catch up with everyone post race. Most were happy with their times; a few disappointed. You know who you are: those who are poorly will come back stronger with a bit of rest and recovery, and those who ran well but are unhappy are their own worst critics and need to practise a little self-kindness! Listen to my Mum – she’s always said you can only do your best, and each of us did the best that we could today.

Onwards and upwards, next target for me is Fraserburgh. What about you?