Back in August I had my first experience of Junior parkrun, having the privilege of being the Tail Walker and Run Report Writer. (The run report can be found here: http://www.parkrun.org.uk/duthie-juniors/news/2018/08/06/the-view-from-the-tail-5th-august-run-report-event-45-2/)

So, you can imagine my delight when my Aberdeen Parkrun buddy, Cynthia, asked if I’d be willing to be a Teletubby for the 1st birthday celebration. I was even more delighted when I found out that I could be Po, red being my favourite colour. Alongside Cynthia as Tinky Winky, we had Alison as Dipsy, and Carolyn, also celebrating her own birthday, as Lala. I won’t tell you how old she is as that would be wrong, but let’s just say she doesn’t look it!

Our mission was top secret, a surprise for the youngsters and Cynthia had plotted a cunning plan. After a rendezvous with the other volunteers we’d head up and around the flag pole hill to change before running down for the warm up. We weren’t sure of the reception we’d get as none of us were sure if modern day children would know who the Teletubbies were! This fear was swiftly allayed as a young ‘man’ appeared quietly stating, ‘Over the hills and far away, the Teletubbies come to play!’ as he made his way up to the flagpole.

There followed a little debate as to who should lead the charge before we headed down, waving to the gathering throng of children as we went. High fives and lots of ‘eh ohs’, Carolyn in particular excelling in this. Then it was into the warm up, led by Tammy. There’s a reason why she’s fast, and she led a warm up with great gusto that certainly got our heart rates up and the sweat pouring off us! By the end of our run we all had new found respect for anyone that runs a marathon in fancy dress! 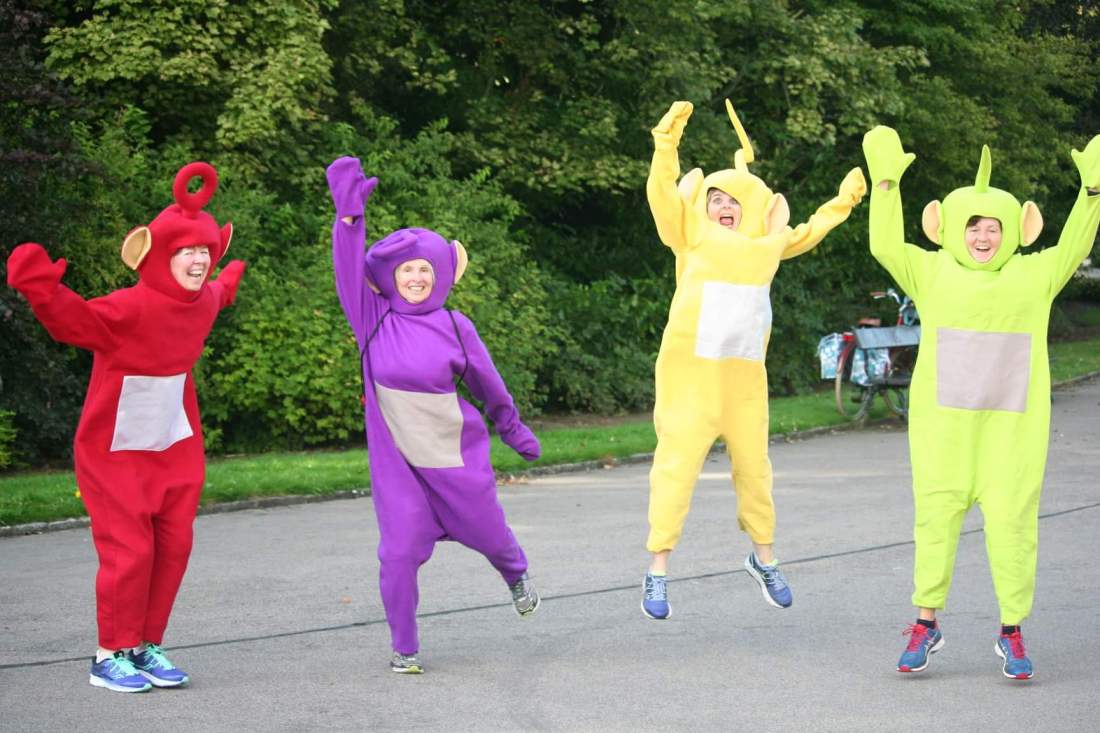 We agreed on our strategy for the run – we’d do one lap, then cheer everyone home. The youngsters set off, many at a very swift pace, and we bimbled around the park, high fiving the marshals and kids, and waving at everyone we met. This was lots of fun! By the time we were finishing our lap and drawing breath the front runners were coming in!

We clapped and cheered the junior runners home. Spider-Man had some impressive moves in the funnel, and quite a few others were in fancy dress for the birthday party. I decided to head back out, running the course in reverse, and had the pleasure of joining someone on her very first parkrun (accompanied by Dad, I hasten to add) as she’d just come of age for running.

There was then an opportunity for the adults to run. This was a one-off and not endorsed by parkrun in any way. Tinky Winky and I lasted the two laps (and didn’t come last!) while Dipsy and Lala copped out after one. In her defence, Dipsy does have a gammy knee and probably shouldn’t be running at all at present. What amused us most was that Kyle Grieg was making a guest appearance in his Team GB kit as part of the #teamparkrun event. Having completed the run with the kids it appeared he was no match for Tinky Winky, dropping out near the bottom car park. Go Tinky Winky!! (Let’s not tell her I saw Kyle FLYING on the Deeside Line later in the morning; I honestly don’t think he’d have managed that pace had we not helped him warm up). 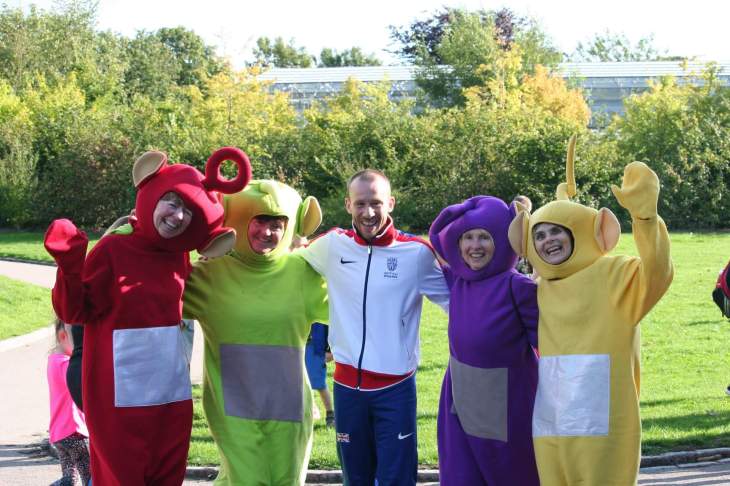 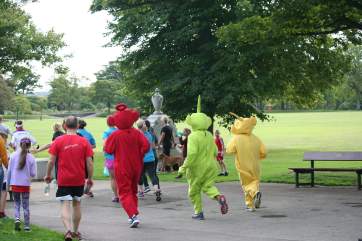 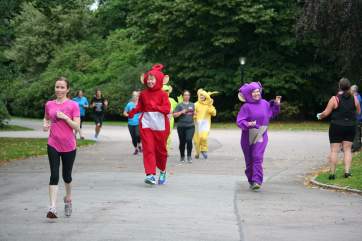 More photos, some lovely nibbles (Tinky Winky it seems is rather partial to fruit, while Po can’t resist a bit of cake), we finally had to part with our (sweaty) costumes. Huge thanks to Nik for lending them for the occasion.

In true parkrun style the day finished in the cafe. Happy Birthday Duthie Juniors! What a great event and so lovely to see you reach the milestone in style! Happy Birthday to Carolyn too – enjoy the celebrations!!