Starting our journey on Friday evening with a stop off in Inverness – we’d recommend the pizzas at the Black Isle Brewery – the morning was only a short drive to Coulags where our walk began.

The weather was definitely in our favour. Skies were clear and it was a balmy 8C at the car park! We met another couple of lads there and exchanged pleasantries before heading on our way. We met them at various points again on the route up and down, and I’m delighted that it was third time lucky indeed for one of them, succeeding in reaching the top today.

The path was signposted from the car park and the path was good on the easy walk out to the Coire Fionnaraich Bothy. A fine bothy this was, upstairs and downstairs, and I enjoyed reading some of the comments in the Visitors Book.

Further on the path started to climb upwards, zig zagging as it went. Reaching the bealach I was less than impressed by the sight that looked ahead: a rather steep looking scree slope! 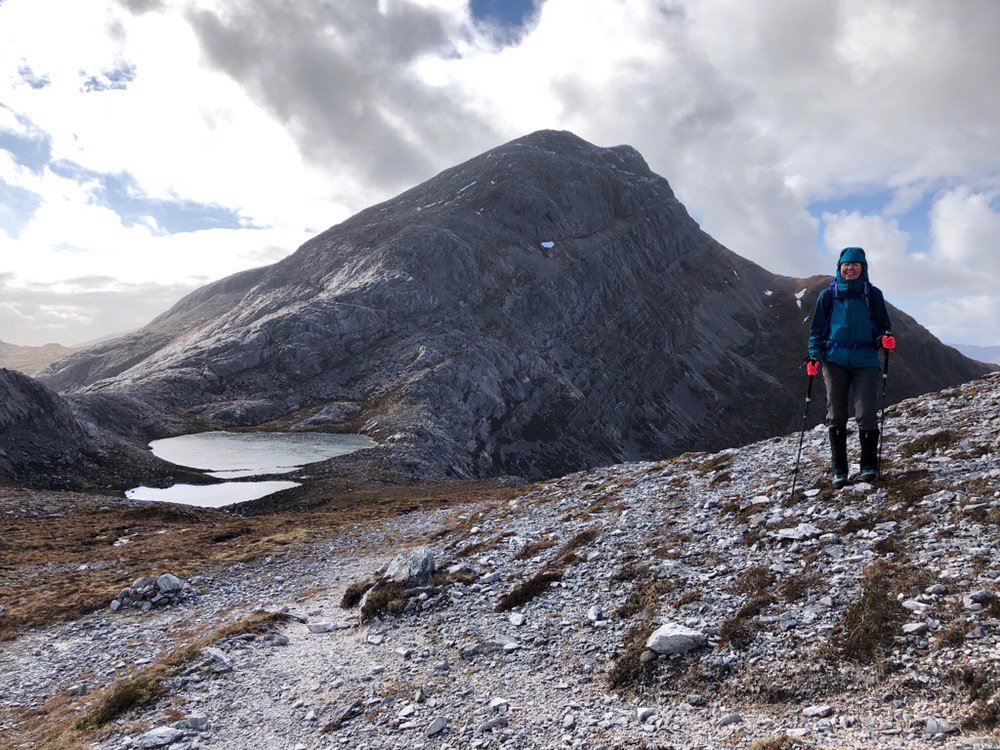 As always, sometimes these things look worse than they are, and for the most part it didn’t present any real challenge. There was only one point at which I felt slightly uncomfortable as the path was pretty steep and the scree cover was loose. However, we were soon over this and reaching the top of this section.

Continuing on, we had a brief reprisal in the form of a grassy plateau before climbing again for the final 200 metres. This final section was bouldery, with small stones. Not challenging but quite slow, trying to pick the path through. Reaching the top we saw the summit cairn and thankfully the very short flurries of snow stopped in order for us to gain stunning views when the cloud cleared. The windshelters at the cairn provided sanctuary for a snack stop, the direction of the slope determining whether there was a slight dusting of snow or clear ground. At this point we concluded the ice axes and crampons may remain at home for the next couple of days. 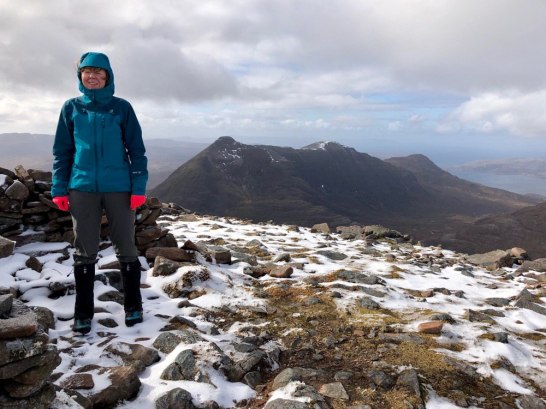 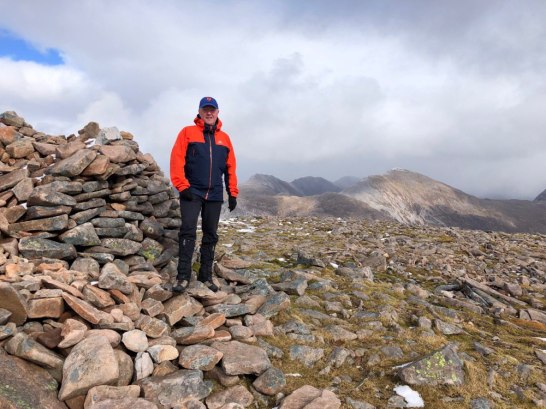 Heading back down the way we’d come steady progress was made. We discovered a better path through the lower scree slopes and before long had reached the bottom of this section leaving only the trudge back along the good path.

Reaching our accommodation for the week at ‘The Old Checkpoint’, we were welcomed by our host, Barry. A great find, a cosy, comfortable wee house booked through Airbnb, I may just be a convert!

Another stunning day on the hills! We woke to a slight ground frost but the skies were beautifully clear, the sun was out and the forecast suggested a 90% chance of cloud free munros. It doesn’t get much better.

Heading out, our plan (or certainly Bruce’s plan) was to do two munros. I was a little less sure of this given the mention of ‘scramble’ in the route guide, but decided I’d make a decision on the move. The hills were listed separately on Walk Highlands, but the suggestion was they’d make a good pairing for a longer day.

We began with Beinn Liath Mhor, parking on the verge as the parking area was already full of others with similar ideas. This took us up through the woods, across the railway line – quite literally: look both directions and listen out for trains – and followed a well maintained track steadily upwards.

As the views opened up we could see the very impressive ridge along which we’d walk to reach the first summit of the day, also seeing Sgorr Ruadh, our second peak. A couple of small cairns confirmed directions, and before long we were making our ascent steadily, and steeply, up the zig zagging path. This path was a little intimidating – the gradient did not make me wish to return this way, but there were some ‘easy’ scrambles ahead (subjective judgement) and I had a very small fear I might end up stuck! By this time we’d gotten in tow with another walker, Charlie. He’d gotten into conversation with us, we’d given him a spare copy of a map as he didn’t have one, and having caught him again he’d just kind of stuck with us.

Part way up we met another couple of walkers and a dog. Chatting to them for a bit, Bruce recognised the man as none other than the legendary Heavy Whalley. Lovely to make his acquaintance.

Gaining height there was a bouldery section that climbed to reach the ridge. Then the fun began! The ridge dropped a little, then rose again before descending and here was the first scramble. It wasn’t anything particularly challenging, just a little bit narrow, and the next scary looking section that we thought we needed to go over was actually just a skirt around. 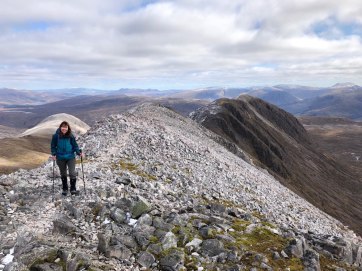 The summit itself was glorious. A sizeable cairn marked it clearly and the views were amazing in all directions. A better picnic stop you’d be hard pressed to find! 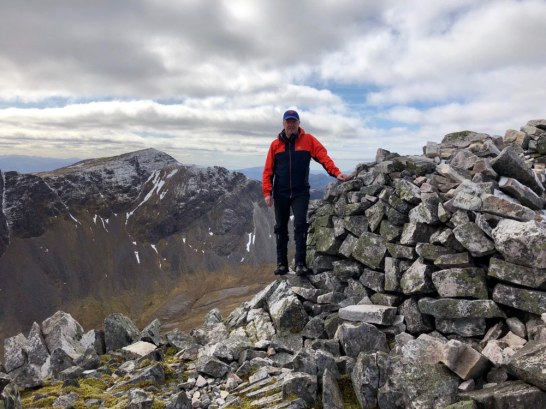 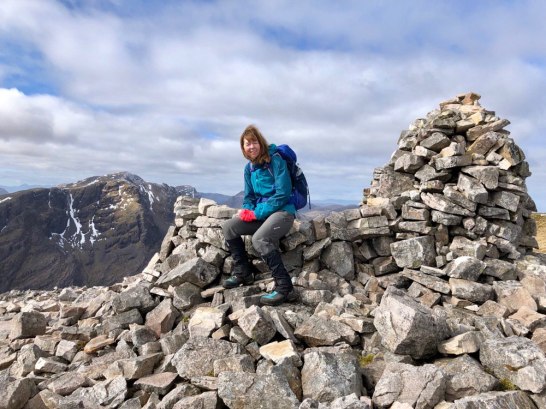 Continuing onwards, the descent started to get interesting. Initially the path was clear and easy, then leading to a scramble down a rocky gully. I found myself surprised in that I actually enjoyed it! Looking back it was quite an impressive way down. Had I thought I had to go up it I’d probably have been less than impressed. 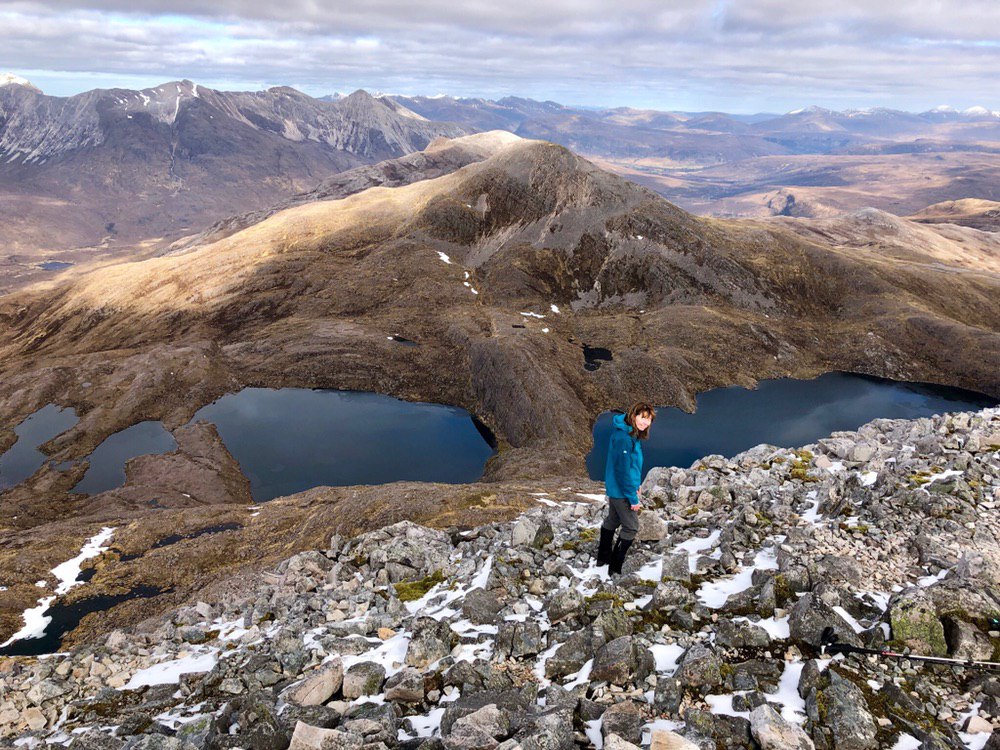 Being in my happy place when the decision time came, I opted to continue up Sgorr Ruadh, bouyed by the fact that I’d managed to scramble and with a little more belief that I might do it again.

The hill ahead looked impressive but also not too far away, and we didn’t have too much more work to do before beginning to ascend again. The path flanked the hill and headed up fairly gradually, weaving a way through the boulders. Towards the upper reaches we met with another scramble. Charlie led the way and I was encouraged by Bruce who followed behind.

I really appreciated the calming words he repeated if I was hesitant, ‘three points of contact,’ as I navigated my way up, conscious of the light dusting of snow and the proximity to the edge of the ridge. I was quite delighted with myself to reach the summit cairn!

After another brief stop we began our descent. Again this was mixed with some steeper sections and a lack of clarity on where the path went, disappearing into nothing.

We navigated our way across the bouldery terrain that held a few patches of snow, finally ending on a more grassy rake. From here we managed to find our way back onto the path that would take us all the way back to complete the loop.

At this point Charlie decided to pick up the pace, and we said our farewells, Bruce and I happy to amble back gently.

The river crossing was reached and Bruce effortlessly boulder hopped across. I followed in his footsteps (more or less) with only a short dip of one foot, not enough to get wet feet with my gaiters.

Reaching the path by which we’d originally ascended we made our way steadily back down. Looking back, the sunlight was highlighting the hills and the panorama was simple amazing! We were both firmly in agreement firmly that this truly had been a great day out.

The forecast had suggested heavy snow would be coming early afternoon so we decided to go for a shorter walk, hopefully missing it. Moruisg seemed ideal, a short walk with a big pull up from the road.

Renowned for being boggy and very wet underfoot we figured having had a couple of dry days it might not be too bad. I think we probably did get off lightly in the grand scheme of things. Apart from a near slip on the way up we came off unscathed.

The bog eases as the path rises after the railway line and before long a stonier section is reached. This is where the big pull begins and it is pretty relentless from here until the ridge. Zig zagging back and forth a little helps on the upper grassy sections where the legs are weary and the terrain is softer underfoot.

On the ridge, a big cairn is soon reached. Although impressive, this is not the true summit. Another cairn lies a short distance along the ridge. We didn’t loiter here as the wind has picked up a little and the chill was noticeable.

The initial descent was quick and easy before slowing for the steeper section. The path was easy to find and we continued to make decent progress, before long dropping down onto the flatter boggy terrain at the bottom. 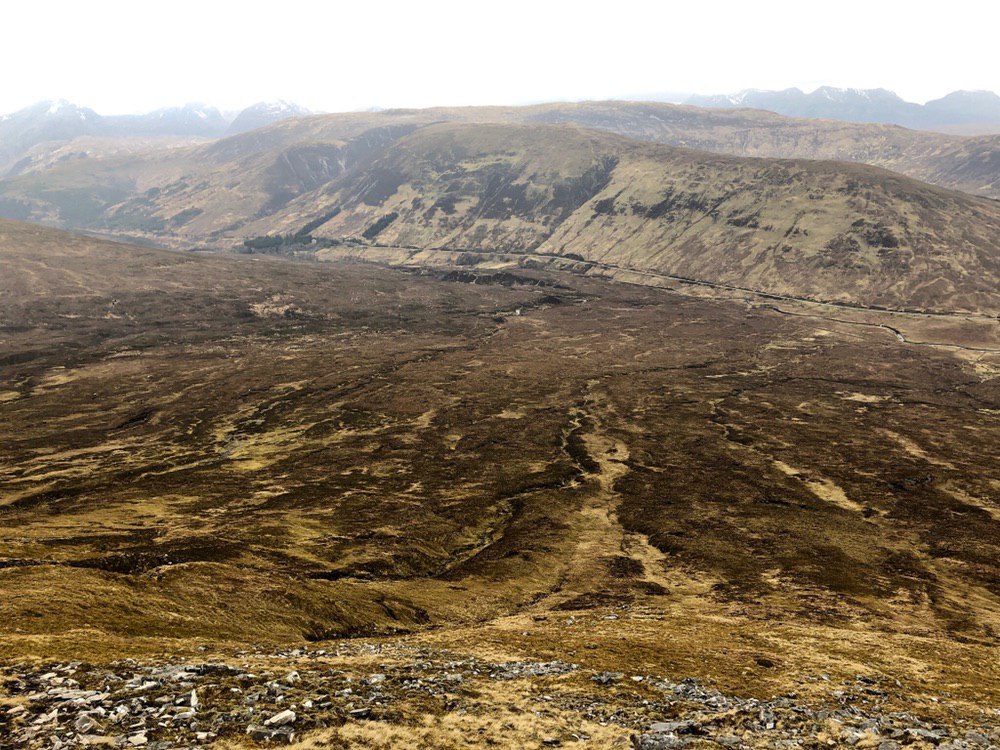 A wee burn provided enough water to clean the muddy boots, and we reached the car dry. Aside from a tiny flurry of hail near the top the forecast snow is yet to materialise. Today is 1st April – surely MWIS and the Met Office aren’t conspiring together for April Fools?!

One thought on “Spring Holiday in Achnasheen”