Over the last few months I’ve developed a niggling injury: my heel hurts and has a ‘knot’ under the fleshy pad. In honesty, I probably first noticed it when I started tapering for the marathon back at the end of April. I hadn’t felt it previously despite regular running. It was nothing major so I ignored it and hoped it would go away.

Fast forward a couple of months and the bony bit on my big toe frequently began to join the party post running, although the heel remained no more than a tiny niggle in the mornings. A trip to physio and podiatry suggested it could be to do with alignment, so a silicone toe separator was fashioned and did seem to sort that out. The heel pain however continued to rumble on quietly in the background. Not enough to be bothersome as it eased on walking around in the morning, just there on occasion.

Sadly over the last month or two it’s gotten worse. I’ve had to cut back my mileage significantly and I’ve binned some racing plans due to my ever decreasing fitness. Extremely frustrating!

I’m trying to see positives where I can. I’m working on strength training more, something that’s gone by the wayside during more intense training periods, I’m going to Pilates regularly as I have for many years, and I’m running easy miles when I can.

Being on my feet for much of the day at work doesn’t help. I’m trying to do plenty of stretching, icing, spiky balling, and all of the other things recommended by the most recent physio visit. Pain relief doesn’t seem to help. Not sure that the sorbathane heel pads are doing much good either. The first steps in the morning are the worst, struggling to weight bear until I’ve been up a wee while. Running doesn’t make it worse which is good, but it does seem to niggle more post run.

I think I’m in this for the long term. Fingers crossed I’ll come out the other side in time for marathon training to start again at the turn of the year. Until then it’s continue stretching, rolling, icing and healing.

On positives, one thing that does keep my spirits up is the Sunday social run around the local trails. As long as I can keep doing this I know all is not lost. A steady 10 miles in the bank again today. Thanks to my Sunday chums for the company and chat. 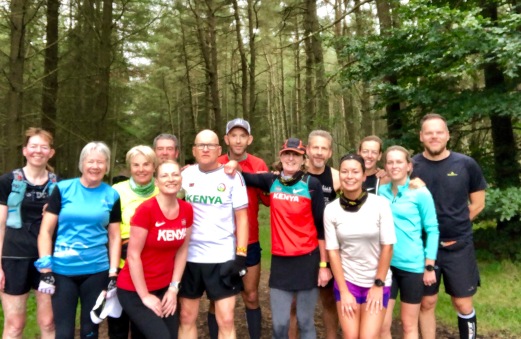 What are your top tips for staying positive during ‘off’ periods?
Any tips on maintaining fitness if unable to run as much?