Reported to be boggy, we were prepared with gaiters and our festival wellies for the river crossing. Thinking it’s been relatively dry and with no rain on the horizon we diverted to Am Faochagach on our way to the northerly munros.

We were both a little stunned when we crossed the road to find the bog started immediately across the stile. If this is what it’s like in dryish conditions I dread to think how deep you’d sink in the wet!

Through the initial bog poles came in handy, testing the ground before making the leap of faith across to the next grassy bit. The faint path continued in this vein, marshy and unpleasant. It made for hard going.

Continuing on we reached the river crossing at Abhainn a’Ghrabainn. This is what we bought the Feetz festival wellies for! They’ve been carried on a few outings and not yet been on, but today they were just the ticket. The rocks were far enough apart and the crossing wide enough to be intimidating. The water was also flowing pretty quickly although it was fairly low. Bruce opted for rock hopping – until the ‘plop’ signifying that he’d slipped, thankfully only getting wet up to his knee. I got partway across before retracing my steps and heading further upstream. Walking poles were pulled in the current but gave me a chance to stable myself as I gauged the next foot placement. I was highly delighted to reach the other side dry, albeit with slightly shaky legs.

Onwards the path continued to be boggy and hard going, drying out and becoming better higher up. We finally reached the ridge and the ground levelled out giving blessed relief.

From here it wasn’t too much further to the summit and the final pull up was gentle. There were two cairns, very close together, and amazing views all around. With such beautiful, clear skies, the slog up was most definitely worth it. Views to the Fannichs, An Teallach, Beinn Dearg, Seana Bhraigh, Suilven and even the top of Stac Pollaidh. Had it been a driech, cloudy day it would have been downright miserable! 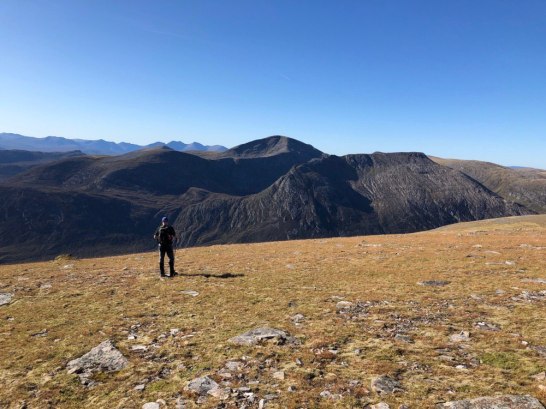 Heading back the way we’d come we retraced our steps, experiencing the joy all over again. I ‘enjoyed’ a slip on the mud, landing on my bum, and made it across the river by crossing at the cairns.

The finale was one leg going down a water filled hole in the bog, causing me to fall over and get one foot completely soaked through. Just as well we were virtually back at the car.

A quick trip down to the river at the parking area saw the boots and gaiters washed off, ready to face another day.